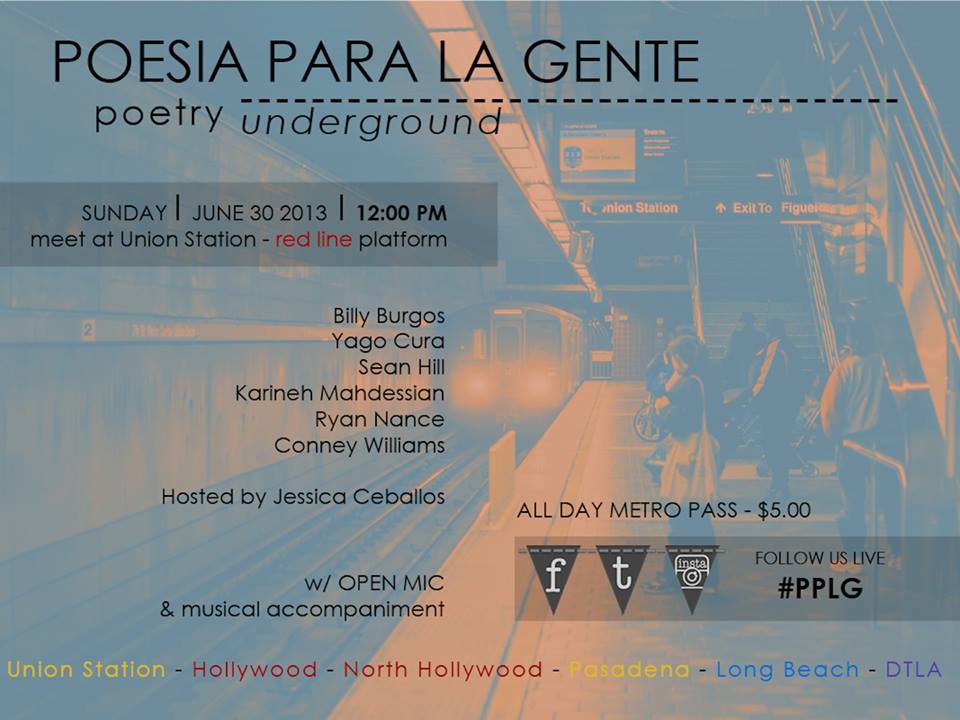 This time…poetry is riding on the metro!

A one-time event on a Sunday afternoon,
to stimulate and encourage artistic expression
throughout the Los Angeles area…
via the
red
blue
gold
expo
purple
and
red
metro lines

What is Poesia Para La Gente?

Poesia Para La Gente (Poetry for the People) is a program that brings poetry to the people of the community, in non-traditional places. Some of these places have been affected, in one way or another, by economical hardship or various forms of social stigmas. All locations are unique in providing a safe setting for uninhibited artistic expression.

WHY THE LA METRO?

Our goal is to share poetry with the community, outside of our choir and into the streets in order to encourage, nurture, and stimulate artistic expression every which way we can, and every where we can. By providing a welcoming, and non-traditional public platform for sharing the power of the spoken word, we hope to stimulate cultural understanding within the diverse population of the North East Los Angeles area…and beyond.
______________________________________________

BILLY BURGOS is an Illustrator/Designer/Poet from Los Angeles. He is a Curator on staff at Gotpoetry.com. His poetry has been featured in both Anthologies and Literary Journals and Zines. In 2007 Billy was chosen as an up and coming poet by the L.A. Poetry Festival. He has served as workshop facilitator of the Beyond Baroque Wednesday night workshop and hosts the First Sunday Open Reading at Beyond Baroque. Billy is the host of Word Ballast, an blogtalk poetry show where he has interviewed such poets as Nikki Giovanni, Nikky Finney, Thomas Sayers Ellis and Nick Flynn. His vivid paintings of some of L.A’s most interesting poets called The Faces of Poetry is a traveling gallery/poetry exhibit which has been featured in both art journals as well as KCET. His first full length collection of poetry called Eulogy to an Unknown Tree is out now on Writ Large Press. www.writlargepress.com/shop/#burgos

YAGO S. CURA is a substitute librarian for the Los Angeles Public Library. He publishes Hinchas de Poesía (www.hinchasdepoesia.com), an online literary journal of Pan-American writing, and is proprietor of Hinchas Press. Yago has had poetry published in Lungfull!, LIT, Exquisite Corpse, PALABRA, Skanky Possum, Versal, 2nd Avenue, New Orlean’s Review, Tidal Basin Review, U.S. Latino Review, Borderlands: Texas Poetry Review, La Fovea, and COMBO. He moderates a Spanglish poetry blog, Spicaresque (http://spicaresque.blogspot.com/), which has had more than 40,000 visitors and a librarian blog, The Shusher (http://theshusher.tumblr.com/) which documents his outreach efforts on behalf of the L.A. Library Foundation and has had more than 1,000 visitors.

KARINEH MAHDESSIAN learned english by reading nancy drew books and watching married with children. she has a great affinity for really large earrings. she enjoys tacos from highland park taco trucks. she will challenge anyone to a thumbwrestling match. anytime. anyplace. she always has her chess set riding around in the trunk of her car. and she is absolutely in love with haikus. make her happy. drop her a line at karineh3@gmail.com

RYAN SCOTT NANCE hasn’t ever been to Turkey, not once. Nor ever to Saint Peter’s Basilica. Never has he made a living selling potatoes. There was a time when he did travel, but that time has passed. There was a moment, a decade ago, when the faint smell of mildew in the stacks of the Butler Library was reward enough. There will be a day, in the not too far-off tomorrows, when he will try to use whatever it is he has at hand to make you happy. Today is not that day. In the meantime, he has poems (appearing in The Diagram, Drunken Boat, Mantis, Literary Imagination, Red China Magazine and Graffiti Rag) that he has written in hopes they will feel good on your tongue and he has websites he hopes will let you do what you want to do and finds a lot of the things in the world fascinating. http://5thingsilearnedtoday.com/ http://rtsnance.com/

CONNEY D. WILLIAMS is a Los Angeles based poet, actor and performance artist originally from Shreveport, Louisiana where he worked a radio personality. He has one previous collection of poetry “Leaves of Spilled Spirit from an Untamed Poet (2002).” His poetry has also been published in various publications and anthologies, Voices from Leimert Park; America: At the End of the Day; and The Drumming Between Us. He has appeared on stage and television. He has a passion for writing has performed his poetry on television, radio, galleries, universities/schools, coffee houses, and stages around Southern California and across the country; including the Black Arts Festival. He is a community activist and has worked with youth for over 25 years. He is formerly an ordained minister and Youth Pastor in the Church of God in Christ. He hosted a weekly cable television bible study and also recorded a gospel rap cd called L.I.F.E (1985). He is the Artistic Director at the World Stage in Leimert Park; and is a member and current Coordinator for the Anansi Writers Workshop. This workshop at the World Stage has produced some the most respected African American writers in the country. His has collaborated with artist Charles Bibbs on the production of WordArt; a monthly event of poetry, jazz, and visual art. He has hosted several poetry venues and been a curator for many poetry/jazz events throughout Los Angeles. He has been the Poet’s Stage Coordinator for the Leimert Park Book Fair for five of its six-year existence.

JESSICA CEBALLOS is a writer, photo-taker, music-maker, volunteer, community advocate and cultural wanderer. Third generation Southern-Californian, Jessica has been recognized by the City of Los Angeles for her work bringing literary arts to the community. Her work has been published in journals throughout LA, SF, NY, Glasgow, and online. She organizes and hosts two monthly readings, one at Avenue 50 Studios in Highland Park and the other at Beyond Baroque in Venice. She’s currently working on a novel, her first book of poetry, and a couple musical side projects. www.jessicaceballos.com