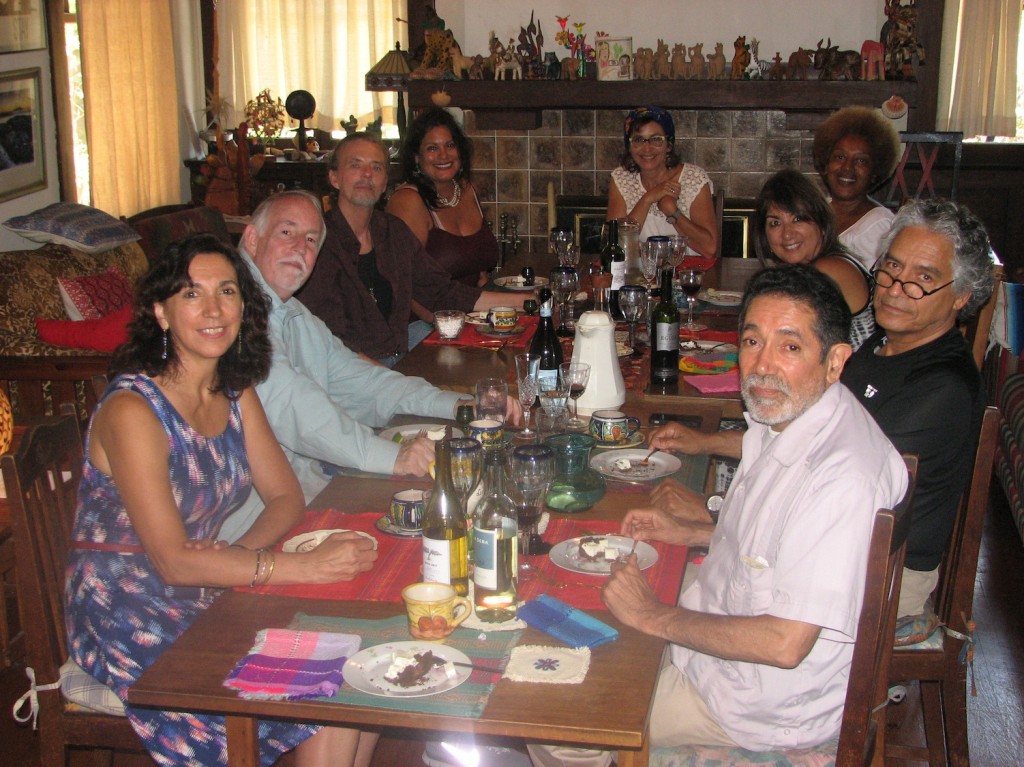 Raoul De la Sota, Director
Raoul De la Sota has had a 43-year history of lecturing and travel programming, starting with his 1964 Fulbright Fellowship in Peru, South American, up to his curation of the “Spirits of Los Angeles” exhibition at the LA Municipal Art Gallery. He has been an exhibiting artist for over 44 years. Since 1967 Mr. De la Sota has been a Professor of Art at LA City College. He has been on the Board of the Avenue 50 Studio since 2004.

Kathy Gallegos, Director and Founder
A Cuban-Puerto Rican-American born in NYC, Ms. Gallegos emigrated to California during the turbulent 60’s. She became a political activist in the 70-80’s working on a left-wing newspaper in the graphics department. In the 80’s Ms. Gallegos visited Nicaragua to paint a mural; and twice to Cuba for their international art biennials. From 1995 to 1996, Ms. Gallegos lived in Tegucigalpa, Honduras exploring the art of Central America. Her social and cultural activism led to her founding the Avenue 50 Studio championing issues of social responsibility. Since 2000, she has been the Director of the Avenue 50 Studio.

Lara Medina, Director
Professor Medina is an educator who holds a Doctor of Philosophy in American History, a Master of Arts in Theology, and a Bachelor of Arts in Combined Social Sciences. She is an Associate Professor in the Department of Chicano/a Studies, California State University at Northridge since 1998. She has received awards from the National Endowment for the Humanities, and Faculty Research and Creativity Grants from CSUN. Professor Medina has been a Board Member since 2008.

Geraldine Simmons
Geraldine Simmons is our newest board member. Geraldine is a Puerto Rican-American originally from the Bronx, New York. She studied Accounting at Cal State LA & has been serving as a Controller for the Bob Hope Foundation since 1994. Some of her loves include mysteries, jazz music, dance & travel!

CCH Pounder
Most recently starring in the in the critically acclaimed FX series, The Shield and Brotherson Fox, CCH was nominated for two NAACP Image Award for “Best Actress in a Drama Series” and recently received her second Satellite Award for “Performance by an Actress in a Series, Drama.” Other accolades for CCH include an Emmy nomination for “Best Supporting Actress” for her role as Dr. Angela Hicks on the NBC series ER, and an Emmy nomination for “Outstanding Guest Actress in a Drama Series” for her role in Fox’sThe X-Files. In addition, she received a Grammy Award nomination for Best Spoken Word Album for Grow Old Along With Me, The Best is Yet to Come and won an AUDI, the Audio Publishers Association’s top honor, for Women in the Material World. Also, CCH released her first solo album, Smoke, which combined poetry and music.

CCH is involved with the organization, ARTISTS FOR A NEW SOUTH AFRICA, a nonprofit organization dedicated to combating the African AIDS pandemic and advancing democracy and equality in South Africa. The group, headquartered in Los Angeles, now has 1,200 supporters nationwide.  CCH and her husband, anthropologist Boubacar Kone, were married in an African ceremony in Dakar, Senegal West Africa and were again remarried at a traditional Los Angeles event six months later, and they have built The Boribana Museum (www.boribanamuseum.org) in Dakar, Senegal for the study of cultures of the African Diaspora.  In October of 1997, CCH was honored by the Institute of Caribbean Studies with their award for Excellence in the Arts.