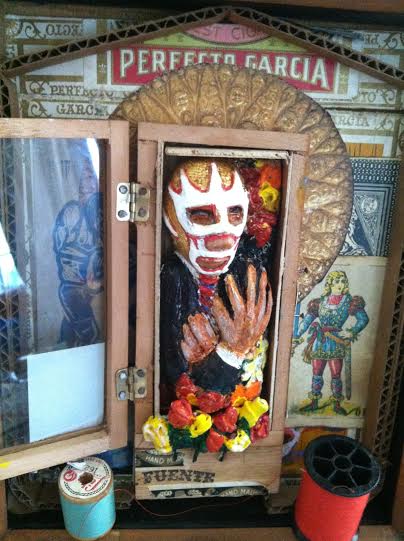 “Dia de los Muertos” is traditionally a day in which friends and family members in México, parts of Central America, and the diaspora celebrate the memories of loved ones who have passed. Altars and shrines have been a primary vehicle for the celebration of this long-held tradition. As part of our annual Dia de los Muertos exhibit, Avenue 50 Studio has  purposely invited artists from different national, regional, and ethnic backgrounds and various aesthetic approaches, and encouraged them to communicate what is important to THEIR WORLD as they see it.

Titled Cajitas y Recuerdos: Cigar Box Shrines (Little Boxes and Memories), this year’s show will commemorate the long-held tradition of the Day of the Dead through a show devoted entirely to cigar-box shrines. Our theme is purposely broad; the work from our artists explore pertinent social, political, personal and/or spiritual concepts through a cigar-box shrine.

This small Recuerdo is in honor of a 15 year old, Guatemalan boy who was found June 15, 2014 after crossing the border in Rio Grande Valley in South Texas.

Gilberto Francisco Ramos Juarez wanted to leave his chilly mountain village for the US to earn money to treat his mother’s epilepsy. His mother couldn’t stop him, so she draped him with a white rosary, blessed him, gave him the phone number of his brother in Chicago, taping it to the inside of his belt buckle. He left on May 15 and traveled 1200 miles from his home in San Jose de Las Flores a village near Huehuetenango, Guatemala. He was found in La Joya, Texas on June 15, shirtless having died of heat stroke still wearing the rosary. Gilberto has become the symbol of the perils faced by the record flood of unaccompanied children from Central America. Between 60-80,000 children will attempt to cross the border this year, most children who perish are rarely identified or claimed. The Border Patrol identified Gilberto only by calling the phone number in his belt buckle.

This past summer, I was deeply affected by the news of the multitude of children leaving their villages coming in search of their loved ones in the United States. Putting a face to these stories broke my heart. The USA is a myth for many from Mexico and Central America when there is no relief in sight in their countries. If you ever have an opportunity to help immigrant children in anyway you can I urge you to do so. There are many important causes but children should always be number one ~ they are everyone’s future.