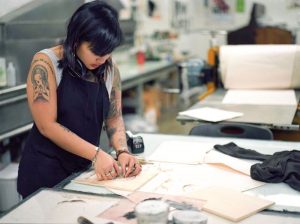 Nica Aquino (b. January 1, 1990) is a multidisciplinary artist & analogue photographer originally from Los Angeles, CA. She holds a BFA in Photography from the Pacific Northwest College of Art in Portland, OR and an MA in Visual Culture from the School of Art at Manchester Metropolitan University in the United Kingdom. Her work has been exhibited internationally in Manchester, United Kingdom; Belgrade, Serbia; Rio de Janeiro, Brazil; and nationally in Portland, OR; Los Angeles, CA; San Antonio, TX.

Nica’s work reveals place, identity & the cross-cultural experience largely through a photographic lens. Via analogue photography, viewers see through the eyes of a first generation Ilokana-American trying to navigate North American culture & drawing inspiration from the people & places around her, exploring diverse immigrant diasporas & communities in the US & beyond. Most recently, her work has expanded to experiment with textiles, installation, video & sound; examining themes of memory & loss, specifically how we [re]visit/[re]create memories & how different tiers of loss ranging from death to post-colonial melancholia are subconsciously embedded in these memories.

Aside from spending her early adolescence moving between states & continents, Nica grew up within immigrant, working class inner-city neighborhoods on the cusps of Koreatown, Pico-Union & Mid-City, Los Angeles. She is now residing in the Northeast Los Angeles community, where she works full time as a lead curator & cultural events coordinator. Nica never thought that becoming a curator would become a career for her. Still new to her own curatorial practice & learning on the job, she is focusing on collaborating with artists of color & bringing visibility to communities & global issues in need of a platform.

Send her a friendly message on Instagram at @nica_aquino, e-mail her at nica.u.aquino@gmail.com & check out more of her upcoming projects at nicaaquino.com.
One of her previous curatorial projects is anotherspace: 4 Filipinx-American Artists Transform Space, which opened at the Center for the Arts Eagle Rock on Friday, November 8, 2019, from 6-9PM.
Translate »