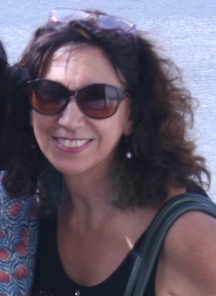 “From 2000 to the present, I have been the Founding Executive and Artistic Director of Avenue 50 Studio,
Inc., a 501(c)(3) nonprofit arts presentation organization located in the Los Angeles neighborhood of Highland Park. Previous to the Avenue 50 Studio, I had a successful career as a legal secretary with Stutman, Treister & Glatt, a bankruptcy law firm. I was also an exhibiting artist. In 1986, along with muralists Barbara Carrasco, Yreina Cervantez and Francisco Letelier, I painted a mural at the Plaza De las Madres in Managua, Nicaragua. In 1995-96, I lived in Honduras spending the year painting and teaching myself B&W photographic darkroom techniques. In 1996, I was asked by artist Leo Limon to teach photography to teens at the Aztlan Cultural Arts Center at the old Lincoln Heights Jail. I also operated their gift shop and organized exhibitions. I founded the Avenue 50 Studio in order to give artists a venue where their voice could be heard. In October of 2014, I was appointed by Governor Jerry Brown to sit as a Council member on the Board of the California Arts Council. In 2017, we received an award from World Learning to produce an international art exchange with Athar Lina Initiate in Cairo, Egypt to take place in 2018.” 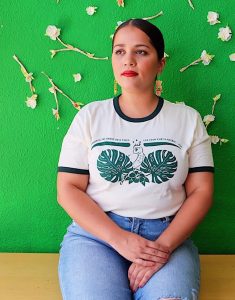 Sara Aceves is a 25 year old Mexican-American artist who was born and raised in Boyle Heights. She received her BA in Fine Arts from Mount Saint Mary’s University. She is currently working as an Administrative and Marketing Assistant for Avenue 50 Studio and is a self employed artist. Sara is also part of her family art collective, KALLIARTE (@kalliarte). For the past few years, they have been able to conduct successful family art shows in their community. Sara is currently building her own business selling her art. 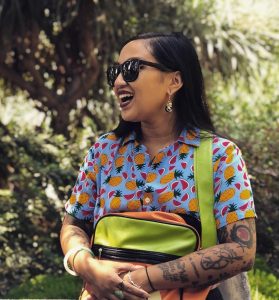 Nica was first introduced to Avenue 50 Studio in 2017. She has worked with us as an exhibiting artist, exhibition curator, our former Administrative and Marketing Assistant, and currently as our Digital Content Coordinator.

Nica Aquino (b. 1990, Los Angeles, CA) holds a BFA in Photography from the Pacific Northwest College of Art in Portland, OR and a MA with Merit in Contemporary Visual Culture from the School of Art at Manchester Metropolitan University in the United Kingdom. Her work has been exhibited both nationally and internationally.

​Aside from spending her early adolescence moving between states and continents, Nica grew up within immigrant, working class inner-city neighborhoods on the cusps of Koreatown, Pico-Union & Mid-City, Los Angeles. She now resides in Northeast LA, where she works as a full-time curator, in addition to the work she does with Ave 50. In her curatorial practice, Nica aims to provide a platform for artists of color and others navigating feelings of unbelonging. She currently directs and curates for her online art space, MATA ART GALLERY.
(Photo by Ian Nguyen) 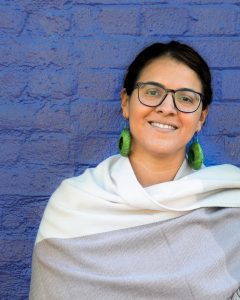 Jessica Ceballos y Campbell is an accomplished literary program curator and a writer, editor, publisher, designer, tenants’ rights activist, and children’s welfare advocate born and raised in northeast Los Angeles. She has centered a 20+ year career in the arts on exploring the transitional state between discovery and performance and how those are affected by and inform the spaces we occupy and exist in.

Her work in community has been highlighted by her past service as an AmeriCorps alum in Alaska, Director At Large on the Historic Highland Park Neighbor Council, where she was also the chair of their Arts Committee, member of the Outreach Committee, a Homelessness Liaison, and a Film Liaison through the City of L.Á’s neighborhood Council Empowerment program. She’s also a proud member and organizer of the Northeast LA chapter of the Los Angeles Tenants Union. She’s been recognized by the State of Alaska, the California State Assembly, the Los Angeles County Board of Supervisors, and Los Angeles Council Districts 1, 14 & 13 for her community work and arts advocacy. As an artist and arts administrator, she’s been awarded fellowships by the Western States Arts Federation’s Emerging Leaders of Color, Splendid Mola Writing Residency, United States Department of Cultural Affairs, the Arts for LA ACTIVATE Arts Advocacy Leadership Program, and the Fractured Atlas’ Artist Campaign School. She’s been awarded grants as an individual artist and as a program director from Council Districts 13 and 14, the LA Department of Cultural Affairs, the James Irvine Foundation, LA Department of Transportation, Poets & Writers, California Humanities, Metro Arts Program, and the California Arts Council.

Her work has been published in numerous journals and in anthologies by PEN Center USA, Tia Chucha Press, and Further Other Book Works to name a few, and she has published three chapbooks: Gent/Re De Place Ing (2016), End of the Road (2017), and Facilitating Spaces 101: part 1 in the “equity in community building: the arts” series (2018), which is intended to weave together three aspects of human agency (person, space, and intention) and how we engage in community and society building in and through the arts. She is currently working on Happiest Place on Earth, a collection of poetry centered around a 1984 visit to Disneyland with her mother while also living in foster care.

Jessica has proudly worked with Avenue 50 Studio as a curator of literary programming since 2012. 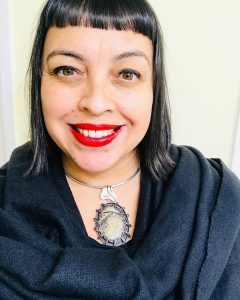 Angelina Sáenz, M. Ed, MFA is a poet and award winning public school teacher whose work focuses on memory, mujeres and motherhood. She is eternally inspired by the daily dynamics of family life, classroom and community. She is a UCLA Writing Project fellow, an alumna of the VONA/Voices Workshop for Writers of Color and a Macondo Writer’s Workshop Fellow. Her poetry has appeared in venues such as Diálogo, Split this Rock, Out of Anonymity, Angels Flight Literary West, Every Other, Cockpit Revue Paris and The Acentos Review. Since 2018, she has coordinate the monthly poetry reading La Palabra at Avenue 50 Studio in Northeast Los Angeles. Her debut book of poetry Edgecliff will be released in winter of 2021with FlowerSong Press. 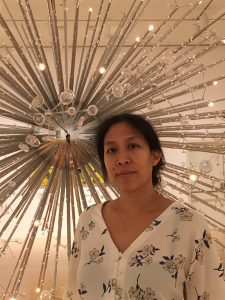 Hataya Tubtim is a grant writer and a community practice artist who works with diverse communities. Currently, she is an Artist in Residence at Rancho Los Amigos Rehabilitation Center through the Los Angeles County Department of Arts and Culture. Hataya has been a fan of Avenue 50, regularly attending shows and community events since 2014. Her contributions to the organization began in 2015 when she began writing grants and volunteered to help organize Chicano Steel, a community-based fundraiser, and In 2017, she worked as a project manager on Vision Zero: Trees of Life. Hataya continues to write grants for Avenue 50 and sometimes consults on fundraising and budget matters. 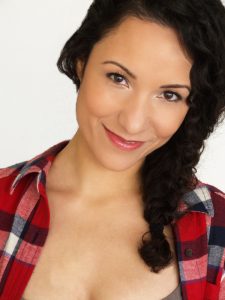 “My name is Jade Puga; I’m the California Arts Council Arts Administrator of Color Fellow for the Los Angeles Region assigned to work with Ave. 50 Studio for the next 9 months. People from all over the world call Los Angeles home, and representing this area as a fellow feels like an incredible responsibility. As a guest on this land, that is the ancestral homelands to the Gabrielino-Tongva, I am especially interested in learning how arts organizations and artists can facilitate a better understanding of our role as guests and how communities of color can work to shift away from colonial systems that were built to uphold white supremacy. We don’t have to look very far in history to find proof of this. The current covid-19 pandemic with Native, Black, and Latinx communities over indexing in infection rates and deaths, make it clear who these systems were built for.  After attending the Highland Park Community Council Meeting and hearing the difficult issues plaguing the community like food-insecurity, unemployment, gang violence, and increased covid-19 infections and deaths, I reflected on the power that the arts have in building healthy communities. Although the fellowship is for a limited time, I hoped my efforts would have a lasting impact for the people of Highland Park. After several conversations with Kathy Gallegos, we decided that one area of focus for the fellowship would be researching the Chicano murals of Highland Park and North East Los Angeles, with the intent to begin the nomination process for Cultural Monument status. Throughout history, art has been a way for people to not only express themselves but used as a teaching tool and a way to celebrate their cultures. When people are viewed as a strain on the city and the books won’t teach their history, what best way to preserve it but on the street walls. I am excited to learn from and work with the Ave. 50 and Highland Park community.” 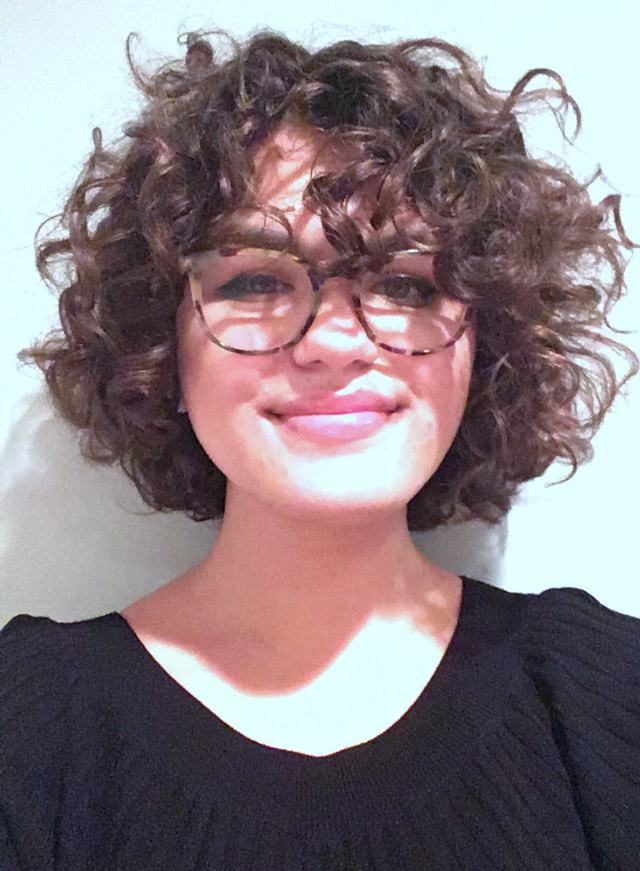 “Hey everyone! My name is Elise, I’m a senior at Pasadena High School. I’m an artist, and I hope to major in graphic design in college. I’ll be helping out with social media management and digital programming. I’m so excited to be interning at Avenue 50 Studio!” 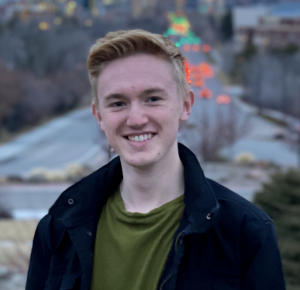 Garrett is a sophomore at Occidental College studying Diplomacy & World Affairs. With a background in Spanish, film, and media, he is joining the Avenue 50 team to assist in the development of a podcast as well as assisting with digital content creation and marketing.

Originally from Boise, Idaho, in high school, Garrett worked with Two Birds—a student-led ad agency—to direct a TV spot for Albertsons and to produce video content for local nonprofits. Prior to beginning his freshman year, he began learning Spanish by translating the lyrics from Spanish music and has continued his study of the language through college. He is currently learning Portuguese.

Since coming to Occidental, Garrett has held a number of jobs. He has worked for Occidental’s newspaper as a videographer, interned with the Spanish department to create virtual reality content, and currently is working the front desk and managing the social media of a hotel. He is passionate about working at the intersection of media, language, and cultural exchange

A Thank You to Our Past Team Members: