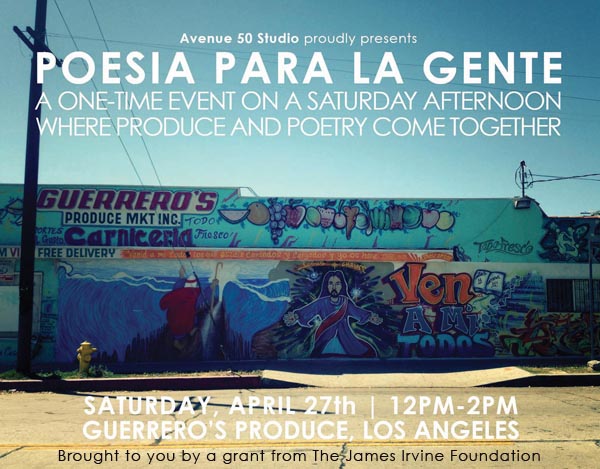 with music accompaniment/poetry by:
Julio the Conga Poet

PLUS OPEN MIC!
Bring your produce-inspired poetry!
ALL languages welcome!!

LUIVETTE RESTO was born in Aguas Buenas, Puerto Rico but proudly raised in the Bronx. Her first book of poetry Unfinished Portrait was published in 2008 by Tia Chucha Press and later named a finalist for the 2009 Paterson Poetry Prize. She is also a contributing poetry editor for Kweli Journal, a CantoMundo fellow, and the hostess of a monthly poetry reading series called La Palabra located at Avenue 50 Studio in Los Angeles. Her book Ascension¬†just came out this April courtesy of Tia Chucha Press.

GLORIA ENEDINA ALVAREZ, Chicana poet/intermedia artist, playwrite, librettist, literary translator and curator, presently teaches creative writing and works as a consultant in public schools, universities, libraries, museums, and art centers. Her literary/artistic efforts have been recognized by the CAC, National Endowment for the Arts, Cultural Affairs Department, City of L.A. – COLA Award, Poets & Writers, Inc., among others. She has published and is read widely in the U.S., Latin America and Europe. Her plays and librettos for opera, Los Biombos, Cuento de un Soldado/Story of a Soldier, El Nio, have been produced internationally. Her books of poetry in English and Spanish include La Excusa/The Excuse and Emerging en un Mar De Olanes. Her poetry has been published in various anthologies and numerous periodicals.

RYAN SCOTT NANCE hasn’t ever been to Turkey, not once. Nor ever to Saint Peter’s Basilica. Never has he made a living selling potatoes. There was a time when he did travel, but that time has passed. There was a moment, a decade ago, when the faint smell of mildew in the stacks of the Butler Library was reward enough. There will be a day, in the not too far-off tomorrows, when he will try to use whatever it is he has at hand to make you happy. Today is not that day. In the meantime, he has poems (appearing in The Diagram, Drunken Boat, Mantis, Literary Imagination, Red China Magazine and Graffiti Rag) that he has written in hopes they will feel good on your tongue and he has websites he hopes will let you do what you want to do and finds a lot of the things in the world fascinating.

YAGO S. CURA is a substitute librarian for the Los Angeles Public Library. He publishes Hinchas de Poes√≠a (www.hinchasdepoesia.com), an online literary journal of Pan-American writing, and is proprietor of Hinchas Press. Yago has had poetry published in Lungfull!, LIT, Exquisite Corpse, PALABRA, Skanky Possum, Versal, 2nd Avenue, New Orlean‚Äôs Review, Tidal Basin Review, U.S. Latino Review, Borderlands: Texas Poetry Review, La Fovea, and COMBO. He moderates a Spanglish poetry blog, Spicaresque (http://spicaresque.blogspot.com/), which has had more than 40,000 visitors and a librarian blog, The Shusher (http://theshusher.tumblr.com/) which documents his outreach efforts on behalf of the L.A. Library Foundation and has had more than 1,000 visitors.