Ron Garcia, ASC, most notably known for his work as a cinematographer, returns to his ELA roots at the Avenue 50 Studio in Highland Park, debuting his solo multi-medium exhibition of his sculptures, photo paintings and cinematography, with an opening reception on Saturday, April 14, 7-10pm.

With a career in Film & Television spanning fifty years, Ron Garcia, ASC, has been creating motion pictures in Hollywood as a cinematographer, director, producer and writer for over 250 theatrical films, television series and made for cable movies. He has worked with such distinguished directors as David Lynch (Twin Peaks TV Pilot, the feature Fire Walk With Me), & Francis Ford Coppola (One From the Heart) where he was mentored by the legendary cinematographer Vittorio Storaro, AIC, ASC. He also won a Cable Ace Award, received two Primetime Emmy nominations, and four (ASC) American Society of Cinematographers nominations. In 2017, Garcia was honored with the prestigious ‘Career Achievement in Television Award’ for Outstanding Achievement in Cinematography from the ASC. For full Filmography visit: http://bit.ly/RVGarc

According to my mother, I began drawing at the early age of three. This was during WWII and times were tough for my family.  My father worked various odd jobs, while my mother was employed only part-time, so making ends meet was difficult. I had a love for drawing, but my parents couldn’t afford the paper, so, cleverly, my mother would tear a brown grocery bag, and that’s what I drew on. Despite our hardships, I did own a box of twelve crayons and I used these to copy the Sunday comics, especially the character of Popeye and Swee’ Pea, and my mother kept a drawing until she passed. I had a hard time figuring out the face of Popeye.

As a child living at the end of the Depression, I was unaware the Second World War was coming to and end, and felt fear watching the military newsreels at the local theater at the age of six. One thing I feared most were the safety drills in school where we all hid in the basement to avoid potential air attacks from Japan.  The USSR soon replaced Japan as our feared nemesis, and we would practice the “drop and cover drills” in our classroom. In the early 50’s I always thought it was unreal after I saw the Movie-Tone theatrical newsreels learning how powerful the nuclear bombs were.

With the fear of losing my father and uncles who were stationed overseas in the Pacific and Europe, and hearing of the death of my uncle (my father’s younger brother ) who died in Germany on the “big push”, I withdrew into my fantasies and started building model warplanes and warships and continued drawing anything that caught my fancy.  Television didn’t really exist for us yet financially,  so I glued myself to the radio, enjoying episodes of The Lone Ranger,  Suspense and, Lights Out.  With no images to stop my mental visuals, these stories sparked my imagination in the a way that movies could not.

Through this, I developed what I call my, “pre-visualization“ skills, which were also influenced by myriad visits to the County Natural History Museum at Exposition Park, where the summer Olympics were held in 1932. This museum featured exhibitions of dinosaurs, Native American memorabilia,  ancient pottery from across the globe, and dioramas of sabertooth tigers and mastodons that roamed wild in Los Angeles thousands of years ago that were preserved in the La Brea Tar Pits.  Also inside the building, much to my delight, were classical paintings of European landscapes and portraits of royalty.  Little did I know that the depiction of light hitting the subjects in the paintings was Influencing my unconscious about the perception of dimensions in the eye / brain. I was  enthralled that an artist could paint what appears to be a three dimensional image on to a two dimensional plane. This began my quest to understand how my conscious perceived reality.

After devouring the complete works of Carl Jung at the age of 35, especially his treatise, Man and his Symbols, I discovered that my “symbols “ are founded in the exploration of images or objects that are influenced by the “unconscious”, “collective unconscious”, “ archetypes”, the “anima“, “ animus” and the “shadow figure”.

After working as a Design Draftsman in the burgeoning aerospace industry during the early 1960’s, then having a fruitful five decade career as a cinematographer, I discovered sculpting in clay, and a little later, abstract photo painting utilizing modern technology such as digital cameras and Photoshop.

I was elated to discover digital photographies “slow shutter” feature and its ability to reveal the “inter-world” of our physical universe. Natures hidden creativity could thus be recorded by slurring time and light particles. As a child studies the clouds to see anthropomorphic images, I could now observe the “secrets” of nature that surround me, particularly in less industrialized habitats of Kauai and Taos, New Mexico, where I spend much of the year.

As I sculpt and paint, I am recreating my childhood cloud gazing process, which is of course guided by my unconscious views of nature’s hidden realities.

It is my hope that this exhibit, my first ever in a professional gallery, provides proof of the myriad influences I have absorbed during a creative life which spans seven decades.

With a career in Film & Television spanning fifty years, Ron Garcia, ASC, has been creating motion pictures in Hollywood as a cinematographer, director, producer and writer of over 250 theatrical films, television series and made for cable movies. He has worked with such distinguished directors as David Lynch (Twin Peaks TV Pilot, the feature Fire Walk With Me), & Francis Ford Coppola (One From the Heart) where he was mentored by the legendary cinematographer Vittorio Storaro, AIC, ASC. He also won a Cable Ace Award, received two Primetime Emmy nominations, and four (ASC) American Society of Cinematographers nominations. In 2017, Garcia was honored with the prestigious ‘Career Achievement in Television Award’ for Outstanding Achievement in Cinematography from the ASC.

Ronald Victor Garcia was born on the site where the Dorothy Chandler Pavilion stands today, and raised in nearby Lincoln Heights. Garcia attended East Los Angeles College and the Art Center College of Design Los Angeles, where he studied fine art painting. In his early 20’s, Garcia spent eight years working on such projects as the Apollo Command Module, the Second Stage Rocket for the Apollo mission, and the pre-testing system for launching the missiles from the Polaris Atomic Submarine. It was during this time that he was invited by a friend to work on a promo for a trade show, and they headed out to Lake Havasu to film the In-Board Motor Boat Race. Garcia recalls, “We had no idea what we were doing. We rented a 16mm camera, but little by little, we figured it all out, and by the end of it, I was bitten. I fell completely in love with the whole process of filmmaking and decided to learn everything I could about it.”

Garcia went on to produce, write and photograph two western feature films, Machismo (1971) and Salvaje aka The Great Gun-down (1977). The first of these films, Machismo, was a spaghetti western inspired by the work of Akira Kurosawa, Sam Peckinpah, and Sergio Leone and utilized the theme of a Chicano protagonist, an unheard of premise for any mainstream filmmaking at that time. Despite being produced on a $80,000 shoestring budget, it broke the attendance record of the Pacific Drive-in Theater and later played on Hollywood Boulevard as a double feature with Pat Garrett and Billy the Kid. Machismo became a popular cult release in home video some years later. In 1977 Garcia produced his second western, Salvaje, starring Robert Padilla, who had previously appeared in Machismo. Excerpts from Machismo will be on display as part of his exhibition.

During Francis Ford Coppola’s One From The Heart, Garcia showed his mentor, Vittorio Storaro, a short he had made a few years back and recalls, “When I brought it to Zoetrope and showed it to Storaro, he said, ‘Ron, this is beautiful. Don’t copy anybody. This movie is from the heart; you must shoot from the heart.”

In the 1980’s Ron ventured into taking a sculpture class in Los Angeles taught by a renowned New York sculptor Don Gale.  The instructor taught the same style of “seeing” as Ron had learned at the ArtCenter. HIs knowledge of learning to see and draw classical images of the human form allowed him to pick up clay sculpturing quickly, but Garcia’s heavy work schedule meant that his personal time was precious and he could only attend the class at night. Consequently he was able to finish only one piece.  The proof mold for this casting still sits in his studio and will be exhibited here at Avenue 50 Studio amongst nine other sculptures he has completed over the last few years in Taos, New Mexico, where he spends half the year studying abstract clay renderings. His current work is influenced by the Kachina dolls fashioned by Native Americans of the Southwest.

Garcia’s debut exhibition, “Dreams, Reflections & Memories” derives from the title of Carl Jung’s biography. Garcia has studied Jung’s renowned writings in Psychology, and primarily his  “Symbols of Man” which led to his interest in the power of archetypical influences of the psyche, subconscious and the collective conscious in their relationship to art.

Garcia also spent six months in Africa working on on a mini-series Siri Ya Mtungi,  sponsored by the Johns Hopkins School of Public Health and USAID, designed to educate the Tanzanian populace about the AIDS epidemic. Consequently, Africa was the inspiration for many of his photographs and sculptures, and Garcia hopes this is evident in the work.

Today, Garcia mentors young filmmakers thru seminars and hands-on workshops. He has lectured for the the University of Hawaii and the Hawaiian Film Commission and taught the art of cinematography in New Mexico. By sharing his work and knowledge he hopes to assist communities of color in accessing organizations such as the Academy of Motion Picture Arts & Sciences, Directors Guild of America and the American Society of Cinematographers. Garcia feels his current work represents a return to his East Los Angeles roots, and he now pursues a “third career’”  in fine arts and photography.

Photos from the Panel Discussion with Ron Garcia, ASC at Avenue 50 Studio. Special thanks to our panelists Aydi Ortiz, Matias Ponce and Tomas Benitez for being part of Dreams, Reflections & Memories! And a special thank you to everyone who participated in Ron Garcia’s first solo art exhibit. 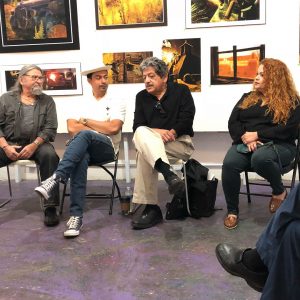 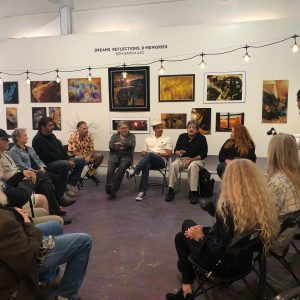 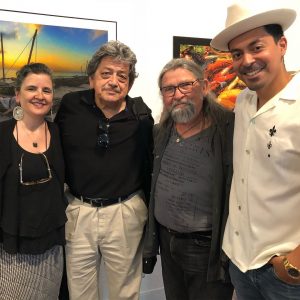 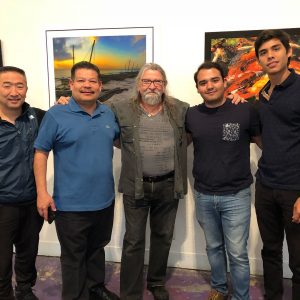 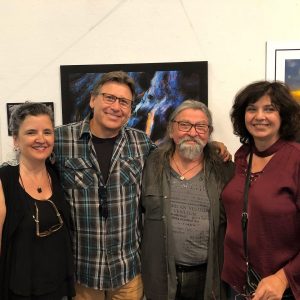 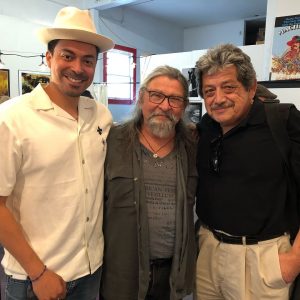 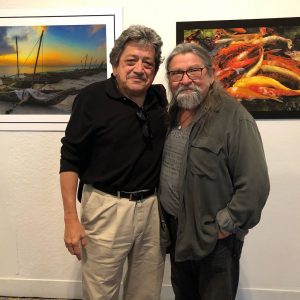 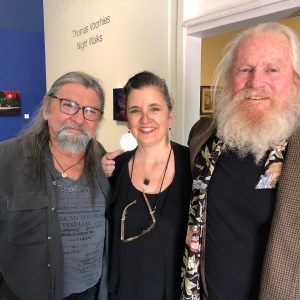 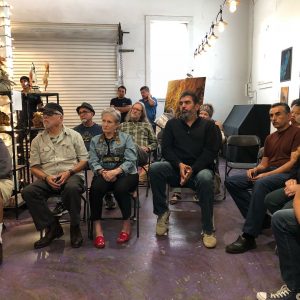