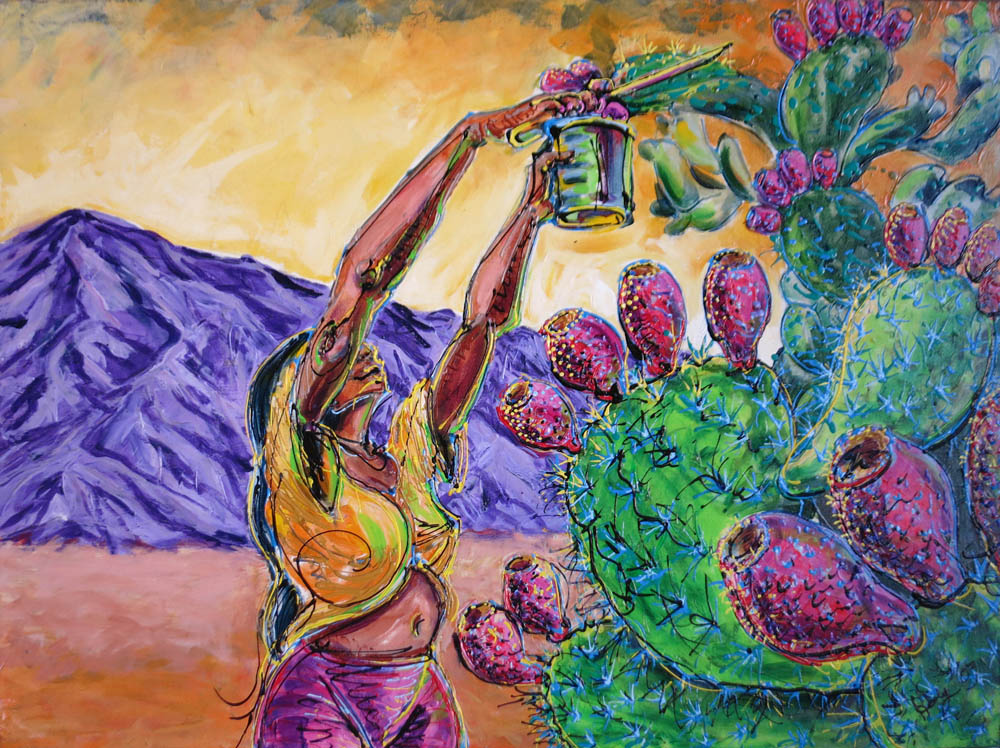 an exhibit featuring the work of celebrated Chicano artist Wayne Healy showcasing his work of monoprints, paintings and silkscreens (many which were created at Self-Help Graphics).

Wayne Healy grew up in East Los Angeles. He was educated as a engineer but in 1972 he met artists from the Mechicano Art Center and soon shifted careers and became one of the leading Chicano muralists. In 1975, he co-founded East Los Streetscapers with his childhood friend David Botello. Each piece tells a story and Healy is a gifted storyteller.

Born in Santa Barbara, California, Wayne Alaniz Healy was raised in East Los Angeles. His entire K-12 education took place within a 10-block area. Moving away to college at California State Polytechnic College – Pomona (BS Aerospace Engineering, BS Mathematics 1968) and then to the University of Cincinnati (MS Mechanical Engineering 1973) gave Healy a wanderlust that persists to this day. The technical education resulted in a 23-year engineering career in aerospace. In 1991, Healy left aerospace to devote full time to art. Healy made it official by earning his MFA [Art 1999] from California State University Northridge.

If one believes in the hereditary transmission of artistic ability, then it is easy to believe that Healy was born to be an artist. Grandfather Adolfo Alaniz, who painted a mural in 1920s’ Los Angeles, was a respected artist who taught his sons to paint. The sons became Healy’s uncles and passed the muse onto their eager nephew. Thus, long before art school, Healy already had a lifetime of art training.

Wayne Healy began to sell his oil paintings soon after moving to Cincinnati, Ohio in 1968 and so started a professional art career that has spanned nearly 40 years. The mid-west period pieces were all commissions and had no gallery exhibitions. That all changed when Healy returned to East Los in 1972 and immediately dove into the ELA Mural Movement with Mechicano Art Center. The focus of the artist’s life was thus forged in public art.

In 1975, WH was reunited with grade school friend and fellow artist David Botello to establish East Los Streetscapers (ELS), the most enduring public art team to come from East L A. After painting murals that celebrate the human spirit for more than two decades, ELS has grown into public art projects that are 3D and multimedia in nature. ELS now build public art from the ground up, as in two 1997 projects: El Pueblo San José de Guadalupe and the LAPD Memorial. The projects use sculpture in concrete and bronze plus architectural materials such as granite, concrete, steel and pavers. The multimedia design effort combines engineering and art, thus opening up a vast potential for new ideas. The challenge of integrating art and architecture motivates ELS in the 21st century.

Although public art demands a lot of time, Wayne Healy continues to produce his own art work.  Besides painting and drawing in the studio, Healy produces a variety of graphic works at East L A’s Self Help Graphics including serigraph, mono-silkscreen and etching. Healy’s imagery mostly depicts everyday scenes that are cultural and/or universal. His art is recognizable by vigorous draftsmanship, dramatically angled composition and strong colors. The work is in public and private collections on six continents.

Healy began his international art odyssey by curating the first exhibit of Chicano art in Europe in 1983.  The exhibit opened at the Triskel Art Centre in Cork, Ireland; birthplace of his great grandfather.  Since then, he has traveled to Egypt, Pakistan, Japan, Spain, Qatar, England, Scotland, Chile, Peru and México to participate in exhibits and give workshops.