CAPITALISM BULLIES EVERYONE, by Rebecca Nabarrete, presented by the Arroyo Arts Collective

Rebecca Nabarrete is a Los Angeles based artist, with a Bachelors from The School of the Art Institute of Chicago. Her art work is collage like imagery painted on found paper which is enlarged and informs the narrative. Many times the found paper originates from everyday use, such as time card receipts, an oven user guide, or a medication prescription receipt.

Often occupying the composition are animals next to pills or a hand floating in front of a school of hammerhead sharks, inviting the viewer to psychologize it. The unnatural juxtaposition of wild animals, domestic objects & banal paper (often with utilitarian origin) creates a narrative that many times reminds humanity of the inescapable commonality we often share with animals and their instinctual behavior, which often our culture prides itself as a species to have shed through intellect and evolution, but many times the reoccurring theme in her paintings remind us of the subconscious behavior humans exhibit, similar to animals instincts, such as migration, and mating rituals.

‘Capitalism Bullies Everyone’ is a mediation on the new normal in the American economy, where struggle is found in within the health care system, and making ends meet, in addition to a general lack of sense of security. Tension and struggle are visually infused onto the found paper which originates from everyday use, such as time card receipts, a housing blueprint, or a medication prescription receipt, reminding the viewer how unresolved issues surface in everyday interactions.

Anxiety and a lack of a sense of security are represented in the humanization of animals and their struggles, simultaneously drawing parallels to their sense of vulnerability. Graffiti infused into the composition illustrates a culture embracing disrespect. Predatory animals such as a school of hammerhead sharks are a reminder of how greed and corruption has won in this county and an acknowledgment of how vulnerable our democracy is. 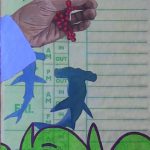 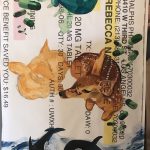 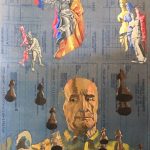 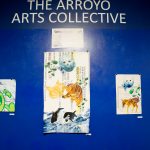 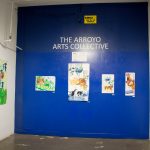 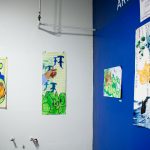 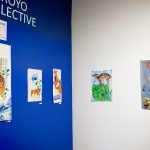 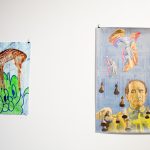 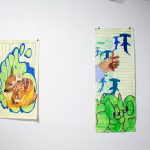