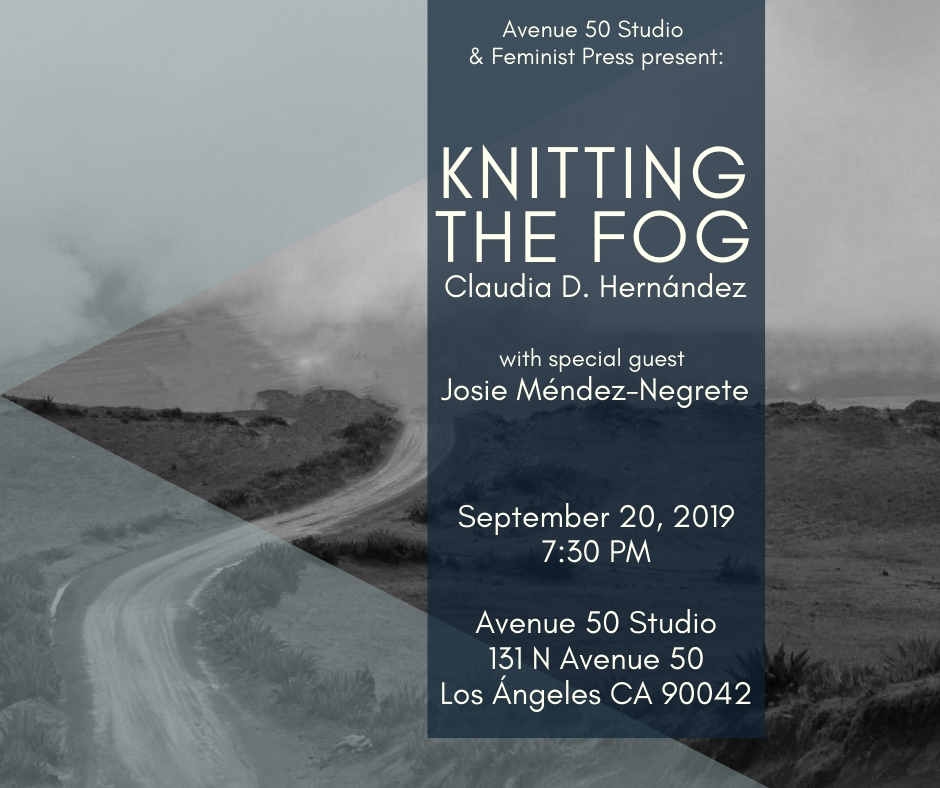 Join us as Claudia reads from Knitting the Fog
and by way of illustrating migration and movement, special guest Josie Méndez-Negrete will read from Las hijas de Juan: Daughters Betrayed.

Seven-year-old Claudia wakes up one day to find her mother gone, having left for the United States to flee domestic abuse and pursue economic prosperity. Claudia and her two older sisters are taken in by their great aunt and their grandmother, their father no longer in the picture. Three years later, her mother returns for her daughters, and the family begins the month-long journey to El Norte. But in Los Angeles, Claudia has trouble assimilating: she doesn’t speak English, and her Spanish sticks out as “weird” in their primarily Mexican neighborhood. When her family returns to Guatemala years later, she is startled to find she no longer belongs there either.

A harrowing story told with the candid innocence of childhood, Hernández’s memoir depicts a complex self-portrait of the struggle and resilience inherent to immigration today. “In light of the current misunderstandings surrounding immigrants fleeing violence in Central America, this book should be required reading. The writing is fluid and lyrical and the story is relevant.” —Mom Egg Review

“In Knitting the Fog, Hernández eloquently captures the hardship, joy, magic, and resilience of three generations of women enduring ‘the battles of this dream’—border after border—from the family home in Mayuelas, Guatemala, through the desert across the Río Bravo, to the streets of Los Angeles. Magnificent!” —Carol Potter, author of Some Slow Bees

“Knitting the Fogbrings us the immigrant experience in a refreshingly new light. This memoir of hybrid forms—moving evocatively between poetry and prose—is not only timely but resonant in sense of place and purpose. How exciting that Hernández’s voice joins the canon of contemporary Latina stories.” —Bridgett M. Davis, author of The World According to Fannie Davis

“This debut gives tender and keen insight into the experience of migrating north to the US and the challenges a preteen faces integrating into the ‘Promised Land.'” —Ana Castillo, author of Black Dove: Mamá, Mi’jo, and Me

Goodreads, in its review of the book offers that, “It is a harrowing story of abuse and shame compounded by cultural and linguistic isolation and a system of patriarchy that devalues the experiences of women and girls. At the same time, Las hijas de Juanis an inspiring tale, filled with strong women and hard-won solace found in traditional Mexican cooking, songs, and storytelling.”

In her narrative, according to Georgina Jiménez from Latin American Review of Bookswrites: “Las Hijas de Juanis a tale of female triumph, justice and hope. … This is true story, written in the tone of a novel, exposes unflinchingly some of the tragic realities faced by many children worldwide who end up living as illegal immigrants and unaccounted for. It breaks the silence about incest within a poor Mexican-American family with such brutal candor that it has been hailed as a feminist survival story.” 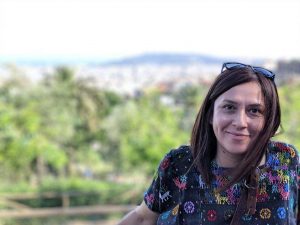 Claudia D. Hernández was born and raised in Guatemala. She’sa photographer, poet, editor, translator, and a bilingual educator residing in Los Angeles. She holds an MFA in Creative Writing from Antioch University Los Angeles. Hernández is the recipient of the 2018 Louise Meriwether First Book Prize. She is the author of Knitting the Fog and she is also the Editor of Women, Mujeres, Ixoq: Revolutionary Visions, published by Conocimientos Press in 2017. Hernández is the founder of the ongoing project: Today’s Revolutionary Women of Color. www.Todaysrevolutionarywomenofcolor.com

Josie Méndez-Negrete, a Professor of Mexican American Studies at the University of Texas at San Antonio, a Professor Emerita effective September 1, 2019, was Lead Editor of Chicana/Latina Studies: The Journal of Mujeres Activas en Letras y Cambio Socialfrom 2009 to 2014). Her autoethnography / testimonio, Las Hijas de Juan: Daughters Betrayed, was published by Duke University Press as a revised edition in 2006 and 2010. Her current book, A Life on Hold: Living with Schizophrenia,was published by New Mexico University Press. She continues to write and workshop A Life on Holdas a two-scene play as a one woman show on her most recent book, along with Cancionera Naci: Toña La Negra—a multimedia one-woman show that engages a discussion on the third root or African presence in Mexico. Her more recent book manuscript, under contract with The University of Arizona Press, Tucson, will be released 2020. www.conocimientospress.com