Kick Ass Women in the Arts! A Birthday Celebration 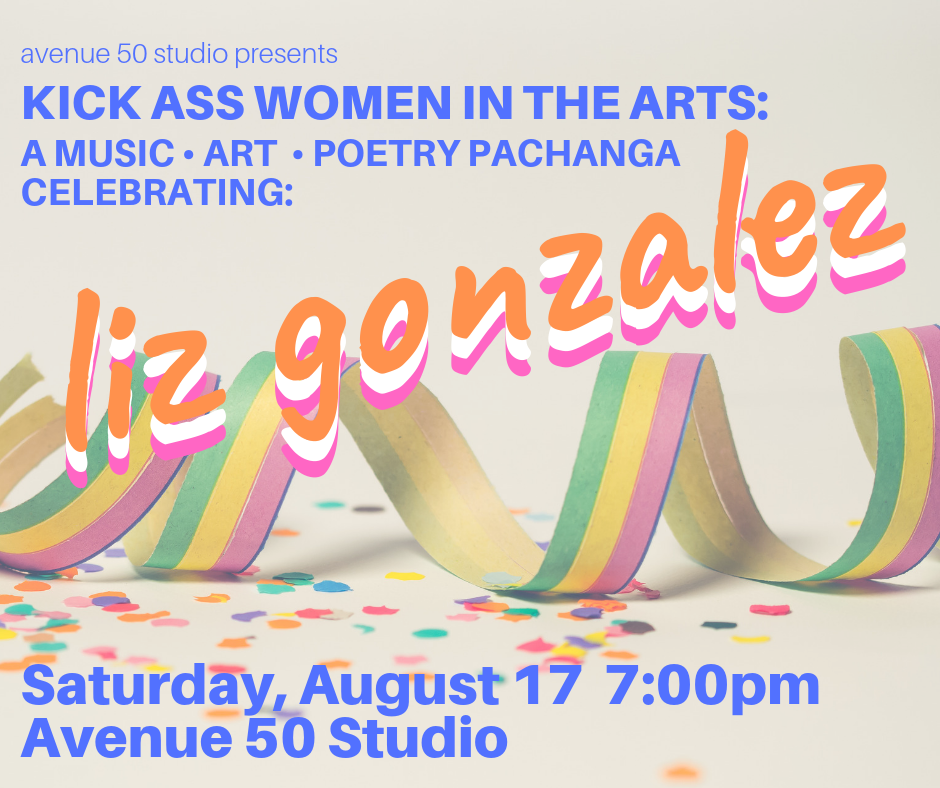 Avenue 50 Studio
is excited to present

KICK ASS WOMEN IN THE ARTS:
a music | art | poetry pachanga
celebrating liz gonzalez and her 60th dance around the sun

Join us for an evening of music, art, and palabra to celebrate liz’ 60th,
as she reads from her collection of poetry,
Dancing in the Santa Ana Winds: Poems y Cuentos New and Selected
published by Los Nietos Press.

Joining liz for palabra will be:

With a visual art exhibit by Elisia Duran.
Followed by light snacks beverages, cake, and DJ with live music by Luna.

Books available for signing and purchase

TRANSPORTATION: Parking is available behind the building, enter through the unpaved driveway.. Avenue 50 is also available via Metro Highland Park Station and Southwest Station stops, and by bus line 81 on Figueroa and Avenue 50. There is also street parking, though very limited.

ACCESSIBILITY: Space is accessible by wheelchair from the front entrance, the bathroom has limited accessibility. Archways are narrow but passable. Sound in the event space has some echoing. Unfortunately, we do not have the capacity for ASL interpretation.

Dancing in the Santa Ana Winds: Poems y Cuentos New and Selected contains twenty-five years of liz gonzález’s best writing. She explores memories, pivotal experiences, and cultural influences that shaped her: The death of a young father, family relationships that nurture and challenge, and the joys and struggles of growing up as a nontraditional Catholic Mexican American. Set against the diverse landscapes of the San Bernardino Valley and Los Angeles, these richly textured and sometimes humorous works, real and imagined, illuminate the trials and beauty of girls’ and women’s journeys to reclaim themselves.

“This collection of poetry and prose by liz gonzalez heralds another watermark in the the enduring presence of a vital Southern California writer whose generational and cultural/geographic roots run as deeply from the Santa Ana waters of the Inland Empire, where she was born and raised, all the way to the Pacific Ocean, by whose Los Angeles shorelines she now resides…Dancing in the Santa Ana Winds is a tour de force, an enjoyable/provocative read, and won’t let you go, even after you’ve turned the last page.”

–Ruth Nolan, author of Ruby Mountain, co-editor of Fire and Rain: Ecopoetry of California and editor of No Place for a Puritan: the Literature of California’s Deserts.

“Some believe the Inland Empire is bereft of culture, but not in her poetry, rich as it is with luscious detail. Overlaid with the rituals and imagery of the Catholic church and 70s rock, funk, and R&B bands pouring from car radios, the Inland Empire is alive with culture, sensation and the fullness of life. And whether it knows it or not, it even has its own de facto poet laureate. liz gonzález.”

“Like the crackling riffs emanating from the backseat speaker on an old Impala, these poems and stories sing us back in time.”

liz gonzález is the author of Dancing in the Santa Ana Winds: Poems y Cuentos New and Selected (Los Nietos Press 2018) and the poetry collection Beneath Bone (Manifest Press 2000). Her poetry, fiction, and creative nonfiction have been published widely and recently appeared in Voices de la Luna, Fire and Rain: Ecopoetry of California, and Voices from Leimert Park Anthology Redux. She was recently featured on Latinopia.com, KUCR’s Radio Aztlan, KPCC’s Unheard L.A-Baldwin Park, and The Palacio Podcast.

liz is a creative writing instructor for the UCLA Extension Writers’ Program. For over twenty-five years, she has presented her work, given talks, participated on panels, and conducted creative writing workshops at a variety of settings, including universities, conferences, public libraries, community centers, and elementary schools. She founded Uptown Word & Arts, promoting literacy and the arts since 2015, is a proud member of Macondo Writers Workshop, founded by Sandra Cisneros, and served on the Macondo 2018 Ad Hoc Advisory Board. She holds an MFA in English and Creative Writing from Mills College, a BA in Theatre Arts: Acting and Directing from CSU Los Angeles, and an AA in Liberal Arts from San Bernardino Valley College.

liz grew up in the San Bernardino Valley and considers herself bi-regional: Inland Empire and L.A. County. Currently, she lives in Long Beach, California, with an indifferent Chihuahua, a talkative tortie cat, and Jorge Martin, a scientist, and musician.

Cynthia Duran is an advertising professional, Esty shop owner, and craft and sewing expert. She has over 20 years of experience teaching children and adults the art of sewing, crafting with fabric, recycled materials, and Mod Podge. Her inspiration is watching the children in her workshops use
their imaginations to create something wonderful. Currently, her favorite project is upcycling and repurposing antique and thrift store finds to keep them out of landfills.

A multidisciplinary artist from ELA, Consuelo G. Flores has been recognized for her cultural work by Self Help Graphics (2017 Legacy Artist Award), &amp; Irvine Fine Arts Center (2018 Honorable Mention). She has an MFA in CNF from Antioch University and is a member of Fierce Backbone Theater Company. She’s written and directed five one-act plays, which were produced in LA and Dubai. She’s done poetry readings throughout the US and Mexico. Consuelo’s known for Day of the Dead work, which includes visual and literary altars, tours, lectures, and fashions. She focuses on themes found within the rich tapestry of her community.

Published writer, spoken word artist, award-winning film and television producer, Frankie Hernandez’s recent presentation is East LA Stories, vignettes about growing up in the 1970s with Chola fashion, classic rock, and disco parties. Frankie’s daughter Luna performs songs from the era. Frankie’s screenplay The Other Side of Pretty is loosely based on her experience of getting divorced and finding herself in the same dating pool as her 20-something daughter. Co-written by David-Matthew Barnes it will be filmed in August. East L.A. born and raised, Frankie lives in Malibu and is the mother of Delilah and Luna.

Luna is a singer/songwriter who recently graduated from Malibu High School. In April 2019 she performed at Carnegie Hall with the Malibu High Choir. While in New York she studied with Katie Ladner of the Broadway show WICKED as well as Rollo Dilworth whose work was debuted by the Malibu High choir on the Carnegie Hall stage. Luna will be studying music and playing water polo in the fall at Santa Monica College with her sights on transferring to UC Santa Cruz. Her passion is music of all types, especially 60s rock and contemporary artist Florence and the Machine.

A Dominicana via Washington Heights now living in the LBC, Lucy Rodriguez-Hanley is a creative non-fiction writer, filmmaker, and mother of two. Her film, The Big Deal won the Imagen Award for Best Theatrical Short. She is currently writing a memoir and feature film script while working full-time and trying to juggle it all. She is a VONA fellow and currently sits on the board of the Long Beach Literary Arts Center. Her films and writing samples can be found at www.lucyrodriguezhanley.com/

Jessica Ceballos y Campbell was born in los ángeles, hijx de magos. She’s a writer, editor, designer, community advocate, activist, instigator, parent, and partner. Her written work has been published in various journals and anthologies such as Only Light Can Do That (PEN Center USA), Coiled Serpent (Tia Chucha Press), Attn: July 31, 2015 (Further Other Book Works), Entropy, LA Magazine, Brooklyn & Boyle, Cultural Weekly, and La Bloga, to name a few. She’s published three chapbooks; Gent Re Place Ing (2016), End of the Road (2017), and Facilitating Spaces (2018). She is currently working on a collection of material inspired by a visit to Disneyland with her mother while she was in foster care, currently titled Happiest Place on Earth. She has recently returned to her hometown of northeast la and lives with a toddler, an adult person, two felines, anxiety, and ADD.

Elisia Duran is a 17-year-old with a passion for the arts. From a young age, she has enjoyed expressing herself by creating collages, painting, and drawing and through the art of cooking. She enjoys reading and listening to music for inspiration. Some of her favorite artists are Haley Williams, Julian Casablancas, and Stephen Chbosky. Through her art, she feels she can be whatever she wants and there doesn’t have to be a reason or explanation.