Avenue 50 Studio
invites you to celebrate the book launch of 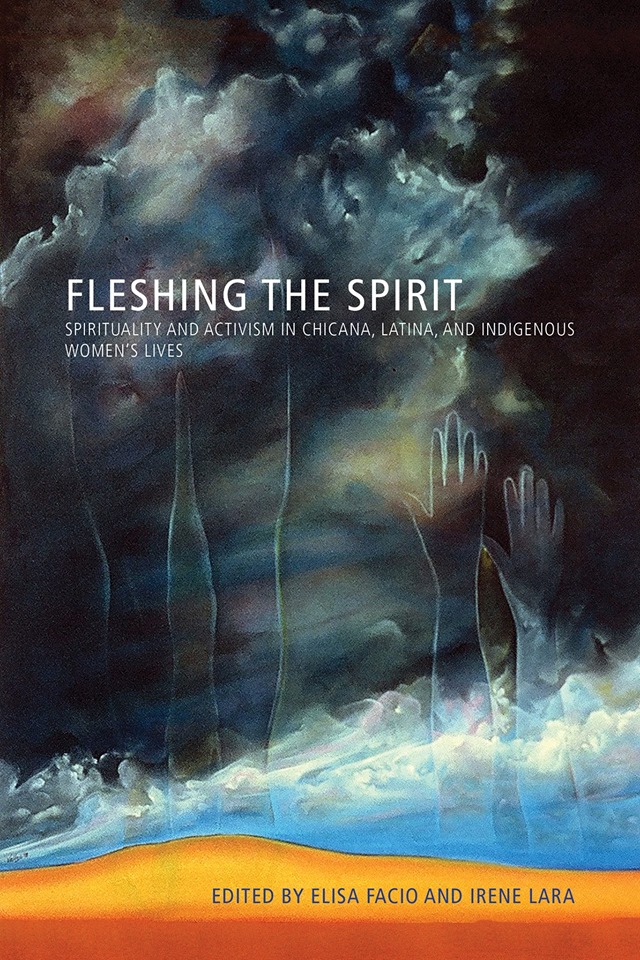 FLESHING THE SPIRIT:
Spirituality and Activism in Chicana, Latina, and Indigenous Women’s Lives

a reading and platica featuring:

Books will be available for purchase and signing

“A comprehensive collection of feminist spirituality will be incomplete without this volume.”—Publishers Weekly

Fleshing the Spirit brings together established and new writers exploring the relationships between the physical body, the spirit and spirituality, and social justice activism. Examining the complex and dynamic connections among these concepts, the writers emphasize the value of “flesh and blood experience” as a site of knowledge. They argue that spirituality—something quite different from institutional religious practice—can heal the mind/body split and set the stage for social change. Spirituality, they argue, is a necessary component of an alternative political agenda focused on equitable social and ecological change.

The anthology incorporates different genres of writing—such as poetry, testimonials, critical essays, and historical analysis—and stimulates the reader to engage spirituality in a critical, personal, and creative way. This interdisciplinary work is the first that attempts to theorize the radical interconnection between women of color, spirituality, and social activism. Before transformative political work can be done, the authors say in multiple ways, we must recognize that our spiritual need is a desire to more fully understand our relations with others. Conflict experienced on many levels sometimes severs those relations, separating us from others along racial, class, gender, sexual, national, or other socially constructed lines.

Fleshing the Spirit offers a spiritual journey of healing, health, and human revolution. The book’s open invitation to engage in critical dialogue and social activism—with the spirit and spirituality at the forefront—illuminates the way to social change and the ability to live in harmony with life’s universal energies.

“This is the first book that attempts to theorize the connection between the brown female body, spirituality, and social activism, or to argue that spirituality is a necessary component of an alternative political agenda.”—Edén E. Torres, author of Chicana Without Apology: The New Chicana Cultural Studies

“Collectively these scholars provide us with a way to engage the idea of spirituality critically, personally, and creatively.”—Dolores Delgado Bernal, co-author of Chicana/Latina Education in Everyday Life: Feminista Perspectives on Pedagogy and Epistemology

“This is one of the best books I’ve read all year.”—AnaLouise Keating, author of Transformation Now!: Toward a Post-Oppositional Politics of Change

IRENE LARA is an associate professor in the Department of Women’s Studies at San Diego State University. Her work has been published in numerous academic journals, and she is the author of several book chapters, including “Healing Sueños for Academia” in This Bridge We Call Home: Radical Visions for Transformation.

MARIA FIGUEROA is an English instructor at MiraCosta College who also serves as co-coordinator of the Puente Project, an effort aimed at Latinos that combines an emphasis in English composition, counseling and mentoring to boost the number of disadvantaged youth who enroll in and graduate from four-year colleges and universities. Affiliated with the University of California, Puente Project staffers train high school and community college instructors and counselors “to implement a program of rigorous instruction, focused academic counseling, and mentoring by members of the community,” according to its web site.

FELICIA MONTES is a writer and performance poet/spoken word artist. She has been sharing her poetry since 1997. Her poetry has been published in each of the annual Mujeres de Maiz art and poetry Publications and also in La Gente and Loudmouth Magazines as well as the book “Fleshing the Spirit: Spirituality and Activism in Chicana, Latina and Indigenous Women’s Lives,” Her work can be heard on the In Lak Ech CD “Mujeres Con Palabra,” or at http://www.reverbnation.com/feliciafe

this reading is a component of
Avenue 50 Studio’s literary arts programming.