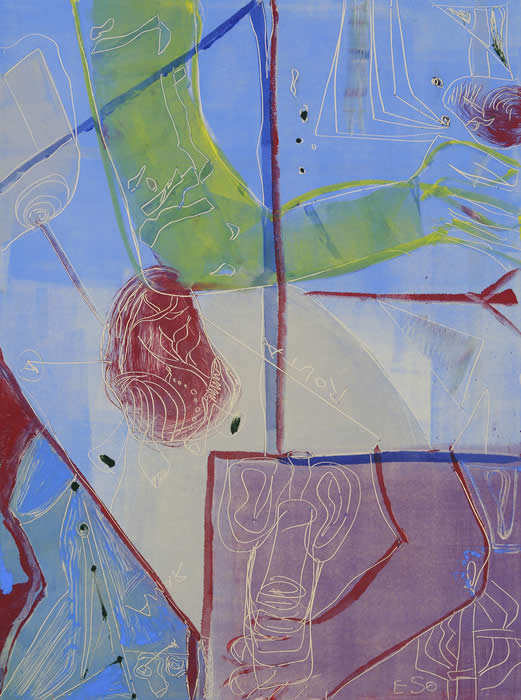 Drawing from a fascination of symbolism and ritual, this experimental series of monoprints explores our physiological existence and its interaction with memory, alignment of time, and the sacred.

Statement from the artist:

The origin of this particular body of work is rooted in a personal process I began to undergo several years ago, as some of my first experiences with death came about.

With the passing of my grandmother and nana within two months of each other, I sought to process through my art making practice. In an attempt to understand the idea of physical and spiritual absence and presence, coupled with larger existential musings of our human condition, such monoprint experimentations in the print lab arose.

Searching to discover a reverence in our physiological existence, I became fascinated with anatomical drawings in gray’s anatomy which explored the skeletal system and other aspects of the circulatory and nervous systems. Perhaps through an evolving anatomical understanding, I began to develop a greater respect for the functions and delicate wonderings of the human body. From a foundational cellular level to the overall support of each system within our physiology, I grew increasingly curious and fond of the strong aesthetics of such physicality.

My focus narrowed to such monoprints, etchings, and photo based prints that explored varied material usage, color palette, texture and subject matter that sought to reveal my understanding of what I describe as ‘the presence of absence and the absence of presence.’

Through studying and researching specific formalities of anatomical features and structure, the connection between physical (land) geography and the physical (human) geography of our bodies became strikingly apparent. Land formations revealed themselves in certain aspects of bone and organ formations. I was reminded of the elements which support and sustain each living system on earth and within the human body. This inextricable link made itself known as each human crevice I saw could have been seamlessly translated to a geomorphic configuration – similar to earth’s own surface. Furthermore, the relationship between the human species and earth can be seen in such parallel aesthetics and its echoes.

As art and science would have it, such prints were birthed out of a deep fascination, curiosity, and respect for the life forces within and without.