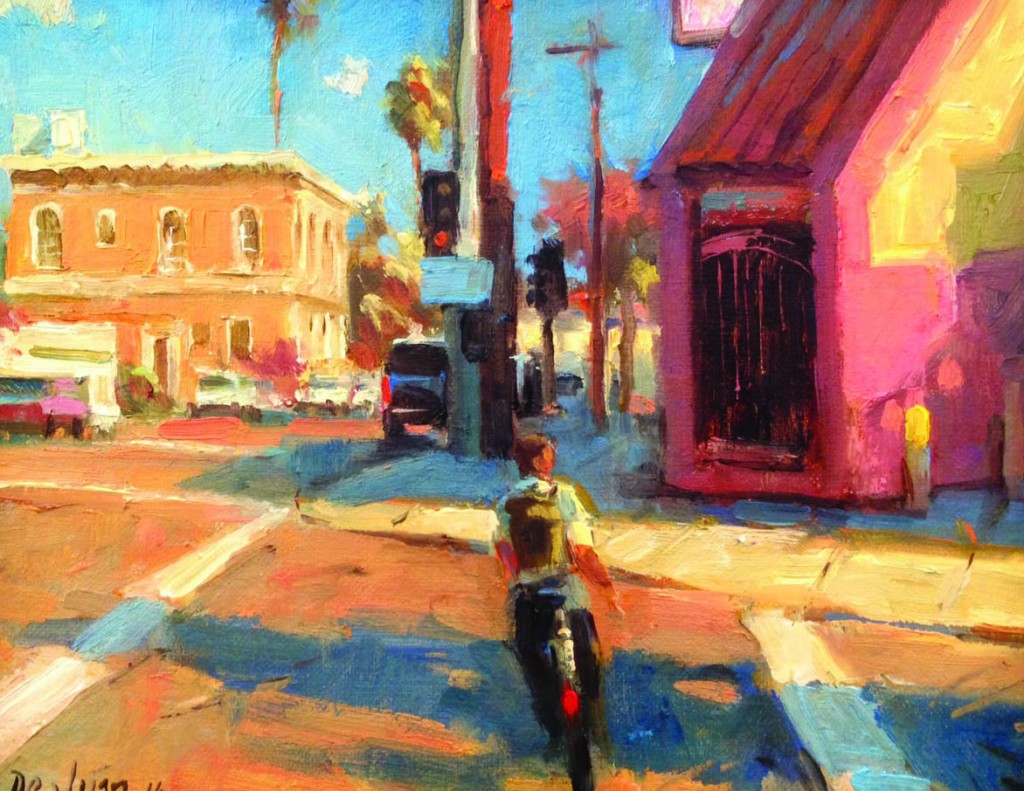 Diane Behrens studied art history in Florence, Italy and Vienna, Austria. Painting at the Art Students League in NYC and at Barnsdall in Los Angeles. Diane paints from life, responding to the immediacy of the moment and the excitement of the changing light and shadow.

She has recently exhibited at: The Southwest Museum, The Susan Anderson Gallery, The Los Angeles Municipal Art Gallery, Coral Reef Angel commissioned by the Leonardo DiCaprio Foundation, Gallery 8000 on Sunset, The Ziegler House, and BARSAC. Diane’s artwork has also been featured on television and film including, ‘Brothers and Sisters’,’Without a Trace’, ‘The West Wing’ and ‘Friends’, to name a few.

When Diane is not painting, she is earning her living as an actress.

“One must not travel too far to see the beauty that surrounds us. My role as an artist is precisely to invite the viewer to take a second look, to pause and be surprised by the familiar, hopefully with a renewed sense of discovery.

I love to paint outdoors and I spend a lot of time in Highland Park  so it is no mystery that its freeways, old trucks, cracked streets, its people and the occasional stray dog have made it to my canvas.  Light is quite dramatic in this parts due to the steep hills but also because of the many layers and character of  Los Angeles’ urban fabric.

As a representational oil and watercolor artist, I feel lucky to have this subject matter at my doorstep and to strive to capture the moments of beauty triggered by the unique blend of light and culture.” – Jose de Juan

Jose L. De Juan graduated from Madrid’s Complutense University in Graphic Design. He moved to the U.S. to pursue his career in visual effects at several Hollywood studios but continued painting throughout.

Jose is a representational oil and watercolor artist who strives to capture on canvas the beauty of every day scenes. His plein air style has developed into a fast realism that relies on the honesty of materials and the economy of brush stroke to represent an idea. Jose believes all paintings start with a concept, a simple idea upon which all else hinges. Most of the time, light and shadow are the protagonists with compositional experiments in a supporting role. He has studied with masters Ray Roberts, Jenifer McChristian and Andrew Peters among others.

Jose had his first solo exhibition, “Our Shared Light”, in 2013. He is represented by the Hillside Gallery in Claremont, CA and the District Gallery in Downtown Los Angeles.  He has exhibited widely with the California Art Club and the Laguna Plein Air Painters’ Association, which counts him as a signature member. He resides in Pasadena with life-partner Armando Ortiz. His website is www.josedejuan.com

Ann Dudrow received a Bachelor of Fine Arts from Rhode Island School of Design with a major in Illustration. After an influential year studying and painting in Rome, she migrated to New York, then Baltimore, finally landing in California. Here she found the quality of light not dissimilar to that in Italy. Enjoying a long career in the field of graphic design, she received the prestigious Fellow award from the Society of Environmental Graphic Design. Recently retired as Senior Director of Environmental Graphic Design for a major retail developer, she can now enjoy the pleasures — and frustrations — of Saturday painting any day of the week. Working most often in oils, she is concerned with capturing the quality of light and color that is so distinctive of the California landscape, taking a special interest in the familiar — the hills, views and neighborhoods around Mount Washington and northeast Los Angeles. She especially enjoys letting some of her graphic design genes emerge as she composes the local subject matter on the canvas. She has been a member of the Mount Washington Plein Air Painters since its inception in 2001.

Things change, we all evolve and change, but in my efforts to create a window on the world through painting, light and color are constants and will always remain my focus. I’ve never tried nor wanted to compete with the camera to record what I see — although it is a very useful tool — rather, I try to portray the essence of a scene through the play of light, shadow, color and shape, recognizable, representational, but always my personal interpretation. That I am able to participate in the centuries-old tradition of painting in oils to record what surrounds me is humbling, tremendously rewarding, exciting, challenging and frustrating, all at once.  I’ve gained influences from many sources — artists throughout history as well as the painters I encounter and work with in my own on-going development.  To all, I am more grateful than I can express for all I have learned and to be considered a member of the arts community.  – Kevin Spitze

Kevin Spitze studied painting and printmaking at De Anza College and San Jose State, and returned to painting in the mid-’90s when his young sons started taking art classes. This followed years of intermittent activity, gaining influences and experience in different ways and places — exposure to ukiyo-e in Japan, batik painting training in Jogyakarta and drawing throughout.  Since co-founding the Mt. Washington Plein Air Painters in 1990 (with Rick Willson and Ann Dudrow), his commitment to painting hasn’t wavered. This all has resulted in numerous local exhibitions and membership in the Pasadena Society of Artists.

Richard Willson’s art invites reverence for the world as it is.  It seeks beauty in everyday scenes.  Influenced by the urgency of global environmental challenges, Willson sees painting, especially plein air painting, as a way of understanding and appreciating our relationship with nature.  He takes the view that “observation is environmentalism”.

The plein air style paintings are smaller works that are painted in the field rather than the studio.  They seek to capture an image in the moment. Even though a painting is a static objects, the works seek to reflect temporal energy of the scene, as light, shadows, wind, and temperature change during the course of a painting session. In most paintings, human interventions such as bridges, roads, or buildings are featured to explore the interplay between natural and human-made. Often, the painting process becomes street theater, as passersby stop to discuss, critique, and inquire.

Richard Willson is a landscape painter based in Los Angeles, California.  A co-founder of the Mount Washington Plein Air Painters, his work reflects an interest in the interaction of the natural and built environments.  The geographic focus is the communities of Northeast Los Angeles.

Willson’s paintings are a parallel effort to his research and teaching activities in environmental sustainability and transportation planning as a professor at in the Department of Urban and Regional Planning at Cal Poly Pomona.

Examples of previous shows include:

Willson’s work is in many private collections and can be viewed on his website at http://richard-willson.artistwebsites.com/

Chris Zambon is a color expressionist. She is represented in many galleries and corporate collections throughout the country and is in demand for her brilliant colored still lifes and vibrant landscapes. Bathed in a strong natural light source, the spontaneous brush work of Chris Zambon contains a luminous quality. The hues are prismatic and pure. Building quick energetic shapes to create rhythmic patterns, Zambon’s paintings have a sense of movement and atmosphere akin to French Plein Air painting. Her style is loose and free flowing, making for an active surface, where the act of painting becomes self-evident and a true pleasure to witness.

Chris Zambon, born in Wisconsin, has always considered the landscape as a primary source of inspiration. Her usual practice is to create her work on location, experiencing all aspects of the scene with their impressions on her senses. Moving to California in 1986, Zambon studied at the California Institute of Art and states, “Color is my primary voice, while rhythm and form are next.” Her personal favorite art historical periods are Impressionism, German Expressionism and American Abstract Expressionism. Each had a bond in common; the spontaneous application of unblended paint.

Although her work describes the natural world through landscapes and still lifes, she is not against exploring pure abstraction. Her vigorous brush work encourages response through color and mood, even representational or abstract, Zambon remarks, “Music, literature and art all enrich one’s life and it is important to be selective of one’s total environment, all of which can be creative.”