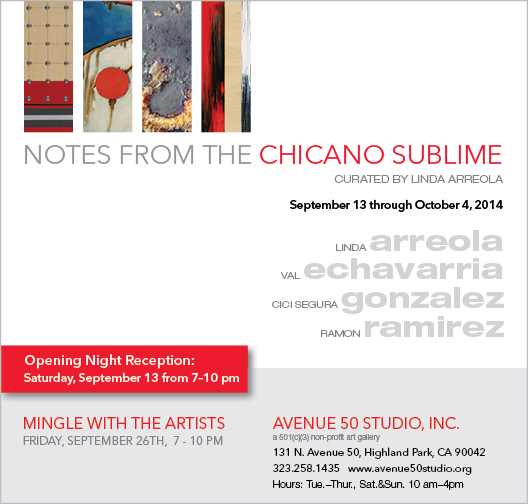 Notes from the Chicano Sublime
curated by Linda Arreola

Notes from the Chicano Sublime is an exhibition of abstract work that brings into focus ideas that border on otherworldly themes associated with the cosmic, biological and spiritual worlds.

My belief is that with abstract non-objective work the painter’s mark, without figuration to grasp, provides entry into the world of the subconscious guided by associations the viewer has from their own personal experiences. This is where the beauty of the sublime is found…not in what we recognize but rather in what we have never seen before or experienced. Yet, it touches us and doors are opened to new sensations, feelings and thoughts.

An exhibit by artist Forrest Bess at the Hammer Museum inspired me to determine that the scale of the artworks in the show be small. The majority of his abstract paintings were no larger than eight by ten inches. This created an intimacy by drawing the viewer in close to see the work. Though small, they had a power and mystery beyond many larger works. The small scale was also appealing as a statement contrary to the super-sized trends of our popular culture today.

In Notes from the Chicano Sublime nothing is larger that twelve by sixteen inches requiring a close proximity between viewer and artwork. The small scale suggests that they are sketches or studies for larger works. This makes them personal and potent. They become the engine that derives the idea in which to explore a bigger picture.

With all this in mind, I chose artists whose work I admire and who could best address this sort of exploration. The artists selected for this show all happen to be my friends and Latino… hence, Notes from the Chicano Sublime. The show is up during Latino Heritage Month, which is appropriate as we tip our hat to our heritage and look to see if there is a Latino Collective Unconscious we can draw from.

Born and raised in Los Angeles, the urban landscape has made a tremendous impact on the development of my psyche. I paint the urban environment, not to replicate it, but to digest it and to understand the trends and social conditions that it generates.

The visual arts have allowed me to perform reconnaissance and interpret my environment. Not only do I aim to satisfy an internal need to better understand who I am, but I also hope to communicate to a larger forum my observations of the environment’s effect on our aesthetic values and its constant evolution.

In analyzing our city, the realization of multiple authors has become a key ingredient of my work. No one single entity is responsible for our urban landscape. There are circumstantial forces at work that weave an unintentional aesthetic. This observation has led me to explore the use of multiple materials as a means to communicate the rich urban texture around us. In my approach, I always start with an inspired image; however, I embrace various elements, including gravity, to help manifest the image, often changing course from the initial intention. As our environment is continuously expanding and contracting, I similarly see my work in a constant state of flux, aiming to bring a visual understanding to our changing community.

In my new body of work, I have branched out from an earlier series of literally graphic, mixed-media pieces that explored the process of communication. Moving from the verbal to the visual, and from the literal to the abstract, this new work illustrates my fascination with perception.

The process of perception begins with an object in the real world (distal stimulus). By means of light, sound or another physical process, the object stimulates the body’s sensory organs which then transform the input energy into neural activity. This raw pattern of neural activity is transmitted to the brain and processed which then result in a mental recreation of the object, which is the percept.

While our initial hypotheses are usually correct, we cannot always process what we see without the inherent bias of our previous knowledge, so there exists a margin for error. Perception alters what we see, into an impure form of reality, which inevitably changes the way we perceive the truth.

These pieces attempt to illustrate that ambiguity. As the old saying goes, “Things aren’t always what they seem to be.”

[nggallery id=36]
I have always been fascinated by uncharted territory and infinite space—the ocean with its hidden treasures, the universe with its endless sky, and the human mind with its labyrinth of secrets. These three mysteries are my favorite subjects. When I paint, these are the worlds I enter and explore on canvas. They draw me into their energy force and I begin a journey with no direction but with a definite purpose: expression and sensation without words.

[nggallery id=37]
My work has revolved around a belief that when things are at their most elemental, they reveal to us their essence. Energy, poetry, and glory, as well as mystery, are innate to all things. My interest has been in honoring the simple, the common, and the elemental. Simple geometric form such as the circle and the square, a single letter or a word are elements used in my paintings. Symbolizing beauty and poetry in material form, they are the humble icons of a grand spirit.

With a background in sculpture and architecture my work has sought an order and three-dimensional quality from which I have developed the use of the “grid”. It is the foundation on which I build and layer my paintings. It suggests an interconnection between all things and is the vehicle that transmits spirit.

I believe there is a connection between the domestic and the sublime, the commonplace and the spiritual, and the material and the soul. This has been the nature of my work.