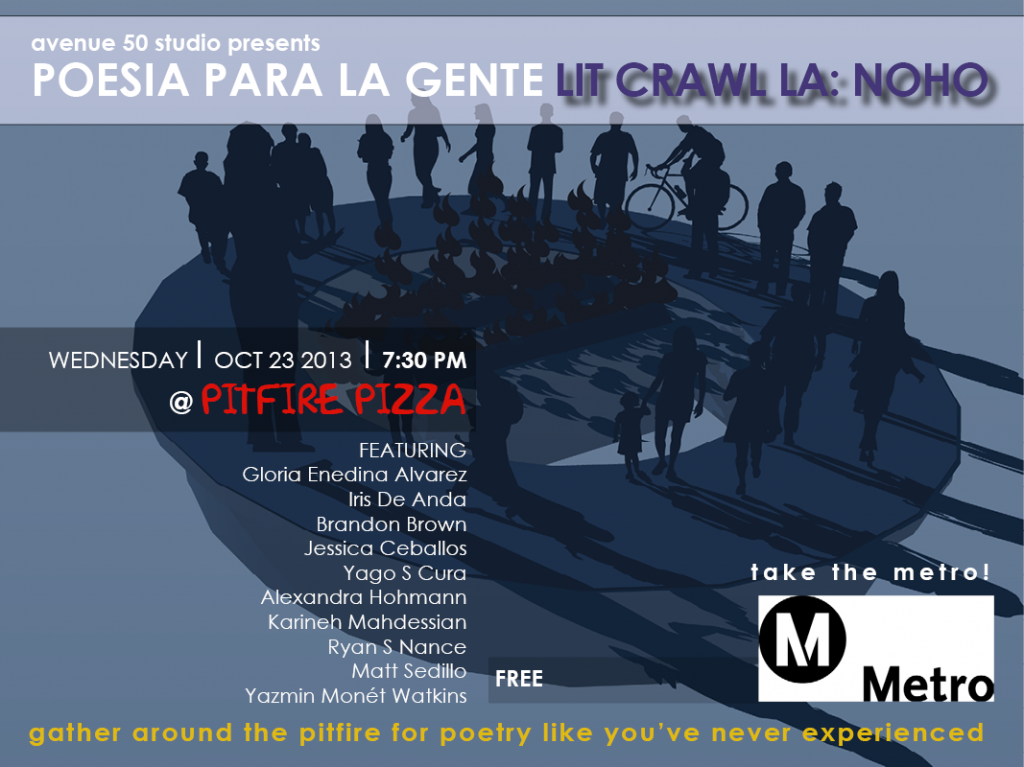 We’re proud to be joining the most extraordinary literary event that the Valley has ever seen!

Join us as we come together, in the great outdoors of North Hollywood, to dance along with sounds of poetry around a pitfire… or something.

Featuring our ensemble performance sampling of PPLG’s pop-up poetry usually performed on the Metro, and read by:

Hosted by: Do we really need a host? Maybe we’ll ask the employees to host. Maybe. Or someone waiting at the nearby bus stop. Or…Or….

And if you wanna experience all that the LITCRAWL has to offer, the Get Lit Players will be doing their thing right before us during Phase One from 6-7pm

Who are the Get Lit Players? Get Lit is a program dedicated to bringing the power of poetic expression to at risk teens through a standards-based curriculum fusing classic literature and poetry with contemporary Spoken Word performance techniques. Get Lit’s programs are designed to boost literacy, foster cultural understanding, and encourage creative self-expression. By immersing teens in the world of great books (often for the first time), Get Lit equips students for future success in college and the workplace by building concise writing skills and dynamic public speaking abilities and a foundation of self-confidence. They have been featured on HBO, PBS, and honored at the White House.
www.getlit.org

PLEASE PLEASE we encourage you to TAKE THE METRO!!
Go Metro to Lit Crawl L.A.: NoHo and save! For more details, click here. Metro provides Bus and Rail transportation to North Hollywood via the Metro Red Line and the Metro Orange Line and Metro Bus. For your best route or more info, visit the Metro Trip Planner or call (323) Go Metro or (323.466.3876).

Lit Crawl L.A.: NoHo is a project of the EMERGE fiscal sponsorship program of The Pasadena Arts Council and is also a project of The Litquake Foundation.

ABOUT THESE AWESOME RAD FABULOUS POETS:

GLORIA ENEDINA ALVAREZ: Chicana poet/intermedia artist, playwright, librettist, literary translator and curator, presently teaches creative writing and works as a consultant in public schools, universities, libraries, museums, and art centers. Her literary/artistic efforts have been recognized by the CAC, National Endowment for the Arts, Cultural Affairs Department, City of L.A., COLA Award, Poets & Writers, Inc., among others. She has published and read widely in the U.S., Latin America and Europe. Her plays and librettos for opera, Los Biombos, Cuento de un Soldado/Story of a Soldier, El Niño, have been produced internationally. Her books of poetry in English and Spanish include La Excusa/The Excuse and Emerging en un Mar De Olanes. Her poetry has been published in various anthologies and numerous periodicals.

IRIS DE ANDA is a writer, activist, and practitioner of the healing arts. A native of Los Angeles she believes in the power of spoken word, poetry, storytelling, and dreams. She has been published in Mujeres de Maiz Zine, Loudmouth Zine: Cal State LA, OCCUPY SF poems from the movement, & online @ La Bloga. She is an active contributor to Poets Responding to SB 1070. She performs at community venues & events throughout the Los Angeles area. She hosted The Writers Underground Open Mic 2012 @ Mazatlan Theatre & 100,000 Poets for Change 2012 @ the Eastside Cafe. Her book CODESWITCH: Fires From Mi Corazon will be published in 2013. Follow her story @ http://irisdeanda.typepad.com/la_writer_underground/

BRANDON BROWN was born in Birmingham, Alabama and moved to Los Angeles, California in 2009 to attend graduate school, where he received a Master of Arts in Theology. He currently serves at a nonprofit organization dedicated to providing permanent housing solutions and resources for families experiencing homelessness. You can follow him on Twitter @yourmoneyisours.”

JESSICA CEBALLOS is just helping try to make less sense of a strange world, from the back seat of her car parked at Avenue 50 Studio and sometimes on her monthly drive to Beyond Baroque. She likes to drive… people crazy, usually just herself though. And when she’s not doing that, she’s “working” on a couple of “projects” involving music-sound-science-language, a novel, and a collection of poetry to be “out” “next year”. www.jessicaceballos.com

ALEXANDRA HOHMANN is a substitute teacher, poet, writer, open mic frequenter, and art lover. Alex, a San Fernando Valley native, has been writing ever since she could pick up a pencil. She is the current facilitator of In the Words of Womyn (ITWOW), a women’s writing circle at Tia Chucha’s Centro Cultural and Bookstore in Sylmar. She loves encouraging women to find their voice. When not in the classroom, Alex can be found cuddling with her laptop.

KARINEH MAHDESSIAN learned english by reading nancy drew books and watching married with children. she has a great affinity for really large earrings. she enjoys tacos from highland park taco trucks. she will challenge anyone to a thumbwrestling match. anytime. anyplace. she always has her chess set riding around in the trunk of her car. and she is absolutely in love with haikus.

RYAN SCOTT NANCE hasn’t ever been to Turkey, not once. Nor ever to Saint Peter’s Basilica. Never has he made a living selling potatoes. There was a time when he did travel, but that time has passed. There was a moment, a decade ago, when the faint smell of mildew in the stacks of the Butler Library was reward enough. There will be a day, in the not too far-off tomorrows, when he will try to use whatever it is he has at hand to make you happy. Today is not that day. In the meantime, he has poems (appearing in The Diagram, Drunken Boat, Mantis, Literary Imagination, Red China Magazine and Graffiti Rag) that he has written in hopes they will feel good on your tongue and he has websites he hopes will let you do what you want to do and finds a lot of the things in the world fascinating.

MATT SEDILLO is a two-time national slam poet, grand slam champion of the Damn Slam Los Angeles 2011 and the author of For What I Might Do Tomorrow published by Caza De Poesia 2010. His poetry has been published in anthologies alongside the likes of such literary giants as Amiri Baraka, Lawrence Ferlinghetti, Jack Hircshman and Luis Rodriguez. Sedillo is a frequent guest on numerous programs on KPFK 9.07 FM and has also been featured twice on Radio Free Atlanta 8.93 FM. An interview and excerpt of his work was featured in a story that appeared in the Los Angeles Times.

YAZMIN MONET WATKINS is an internationally touring spoken word poet and actress based out of Los Angeles, CA. She has performed everywhere from the Bahamas to London to Paris to New York to California and several places in between. A few of her college shows include Harvard, UCLA, Howard, UC Santa Cruz and she has opened for the likes of Amiri Baraka, Sonia Sanchez and Les Nubians. She is the author of “Love Without Limits: The Bi-Laws of Love,” a collection of poems that emerges in the queer literary world under the self-coined – poetography genre- a piece of art that combines both poetry and photography. ‘Love Without Limits’ explores Watkins’ journey through love, sexuality, religion, heartache, and the eventual discovery of self-love. Her poetry explores the intersection of race, gender, sexuality, religion, sexual violence and identity. You may find more information about her at her website, www.yazminmonetwatkins.com or visit Amazon Kindle, Apple iBooks or Barnes & Noble Nook to purchase her e-book online. Watkins believes in the power of peace, love, laughter, freedom and empowering others through art.