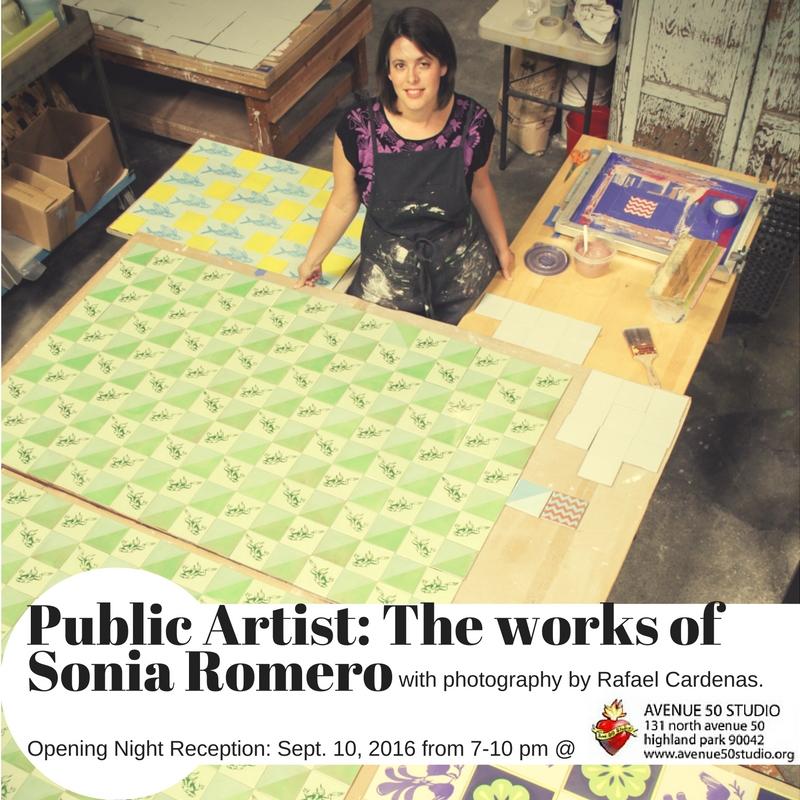 Public Artist: The Works of Sonia Romero with photography by Rafael Cardenas

Los Angeles based artist, Sonia Romero known for her large-scale public art installations opens a solo exhibition on September 10, 2016. Celebrating the 10th anniversary of Romero’s sold-out debut show at Avenue 50 Studio, the exhibition will take audiences behind the scenes to narrate the process behind her works. Selections from Romero’s original designs will give an inside look at her process from concept and design to fabrication and installation for public displays around the region.

“People are familiar with my final large-scale installations in public spaces, but I am excited to share the research and artistic practice behind the process that can take me up to a year or more,” explains Romero a third-generation artist and Los Angeles native. Romero’s meticulous process begins with photographs of people and movement that become original handmade designs created with linoleum cut printmaking and intricate papercut techniques. Designs are then fabricated into large scale installations. These original, handmade works will be the feature of the exhibition. Romero is also creating a public art installation with a mural on the outer wall of the Avenue 50 Studio space. Local photographer, Rafael Cardenas is creating a new photo series for the exhibition to capture how the public interacts with Romero’s final pieces examining the role of public art in local communities. Cardenas has been collaborating with Romero since 2010, shooting models as references,capturing the fabrication and design process and cataloging final installed pieces.

Sonia Romero is a third generation artist and Los Angeles Native. Her debut solo show in 2006 was at Avenue 50 Studio in Los Angeles where she then completed a seven-year residency. She won her first public art commission in 2007 to create a 13-panel porcelain tile mural a the Macarthur Park Westlake Metro Station. Romero has worked with the Los Angeles Metro, the Los Angeles County Arts Commission and the Community Redevelopment Agency among others. She has been completed six total commissions around the region and is currently working on several new projects including a 1,000 square foot mural at Mariachi Plaza Metro Station in Boyle heights. Romero holds a BFA from the Rhode Island School of Design in printmaking. soniaromero.net

Rafael Cardenas, raised in East Los Angeles and based in Boyle Heights, is a self-taught photographer whose powerful black and white images explore his relationship with the streets of his beloved Los Angeles. His work shows a duality in both the subjects he captures and the art form he uses, straddling the edge of art and documentation, of photography and photojournalism. His newly released photography book, MAS ACA captures the often unseen faces and scenes around the City. Cardenas is one of five selected artists of the 2016 LA Metro Lightbox Project. He is currently working on capturing stories of Los Angeles backyard celebrations with his Summer 2016 project. Rafa.la