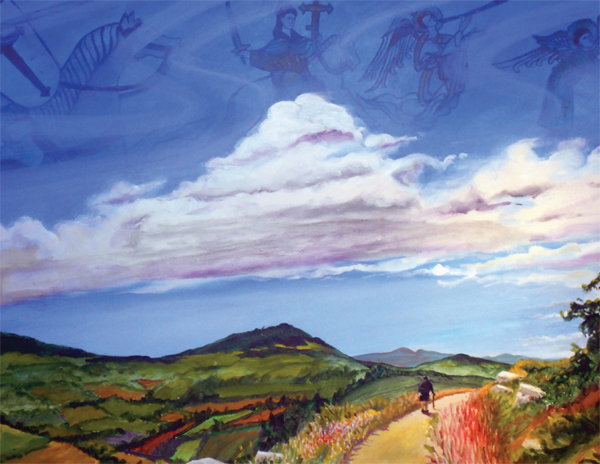 THE CAMINO: A JOURNEY

In the 11th century began the stream of pilgrims to the northwestern corner of Spain and to Santiago, the believed final resting place of St. James the Apostle. The first guide book on the “Camino” was written in the 12th century warning the travelers about bandits, bad food, poisoned water and dishonest innkeepers.

In 2010 my wife, Leticia, began her research into the Camino de Santiago after recalling that her late mother and she had had the same dream about this journey. In 2011 she decided to take her nephew John, who at the time was having difficulties realizing his future.

In August of 2012 the two of them began their trek in Pamplona and reached Burgos, 122 miles and two weeks later. The intense heat of summer had prevented them from traveling across the rather barren “Meseta” to Leon so they took a bus to Leon where our neighbor Kathleen Fitzgerald, her nephew Brian and myself met Leticia while John returned home and to work. The three of us set off for the 156 miles to Galicia and Santiago that took us 13 days.

In 2013 Leticia and I returned in October to do the last 115 miles over the now pleasantly temperate Meseta from Burgos to Leon.

This exhibit is about our sensory experiences during the walk.

Born and raised in Los Angeles by Mexican parents in a bilingual household, Raoul De la Sota studied art at Los Angeles City College and then at UCLA where he earned his Master of Arts degree. He received soon after graduation, the first Fulbright Fellowship ever awarded to a Chicano artist for a year’s study in Peru. That trip was to change his life by experiencing a Latin American country in person for the first time. The traditions, beliefs and sacred mountain landscapes have stayed with him throughout his life.

De la Sota has shown his work in solo exhibits at The Museum of Man in San Diego, in Mexico at galleries in Oaxaca, Morelia and Valle de Bravo, along with shows in Peru. International group shows have included ten countries in Africa and Spain.

Closer to home he has had one-man exhibits at the SPARC Gallery in Venice, the David Zapf Gallery in San Diego and the Southwest Museum in Los Angeles He also exhibited in many group shows throughout the United States including the Gallery of the Organization of American States in Washington D.C., the Armand Hammer Museum in Westwood, the Laguna Museum of Art, the Museum of Latin American Art in Long Beach, the Howeeduzzit Gallery in Alhambra and the Avenue 50 Studio in Highland Park..

He has been commissioned to do paintings and sculptures by the Institute of Contemporary Art in Los Angeles, the Hyatt Corporation in the Bahamas and by the writer Victor Villaseñor for the cover of his book Wild Steps to Heaven. He has created four murals in Los Angeles and in Cuernavaca, Mexico in private residences.  He has designed a poster for the Metro Neighborhood program and created a 20’ high mural for the Metro Division 9 headquarters in El Monte. He has led tours of professors, artists and people interested in the arts to Cuba, Guatemala, Mexico, Peru, Portugal and Spain.

Prizes include an Arts America Grant for a series of lectures on Chicano Art in Colombia.  His work can be seen in the two-volume book Contemporary Chicana and Chicano Art published by the Arizona State University Press and at Howeeduzzitgallery.com   In 2007 his work was seen in the exhibit “Skyscapes” in Terminal Three at the Los Angeles International Airport and at the Los Angeles Municipal Art Gallery in the exhibit “Spirits of LA”.   He recently was featured on the front page of the LATimes Calendar Section as the Curator for the exhibit “Silent Testimonies”, an exhibit of contemporary Ex-Voto paintings. He currently teaches Mexican Art History at Los Angeles City College.

He and his wife Leticia Garcia-de la Sota have been collecting art since their marriage 26 years ago. They have always chosen work both as fine art as well as folk crafts that approaches their own aesthetic sensibilities particularly dealing with humanistic concepts and involving visual and intellectual traditions from Mexico, specifically and Latin America generally. Through the years they have also been fortunate to have exchanged works with artist friends that mirror their own philosophies.