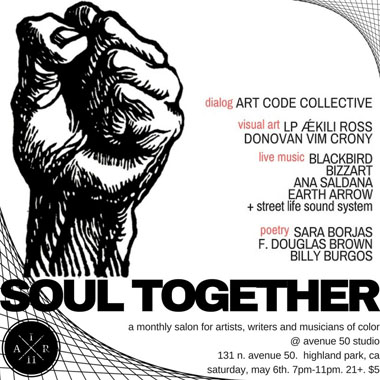 SOUL Together is a collective response to the lack of exhibit space for people of color in Los Angeles. While suffocating under the extreme weight and sheer abundance of white artistry, artists of color have been creating dynamic and engaging work that disposes of stereotypes and decimates gatekeepers and the boxes they reside in. SOUL Together hopes to address these issues by providing a safe and professional gallery space for artists of color to build within and around.

All are welcome. Enter with respect.

Billy Burgos – A graphic designer/illustrator/poet originally from Belize, Central America. Billy grew up in the Leimert Park neighborhood of Los Angeles where he still resides. He is an active member of The Anansi Writer’s Workshop and a mainstay in the local L.A. poetry scene.

Sara Borjas – A Fresno poet. Her interests include space and time, memory, aromatics, cocktails as poems, tiny prints and oldiez. She currently lectures in the Department of Creative Writing at UC Riverside and lives in Los Angeles.

F Douglas Brown – The 2013 Cave Canem Poetry Prize recipient for Zero to Three (Georgia, 2014). He holds a master’s degree from San Francisco State University, and is a Cave Canem and a Kundiman fellow. He teaches English at Loyola High School in Los Angeles.

Bizzart – sound art hiphip to put it simply. Born and raised in The City of Angels, the futuristic hispanic rapper continues to push limits in the underground music scene.

Blackbirdone- a.k.a. Niggy Pop, was born Gershwin Hutchinson. He currently resides in Los Angeles, California, where he was a member of the psychedelic hip-hop group Darkleaf (along with others including legendary producer Cut Chemist). Embracing the intersection of punk and hip hop, Gersh is equally on point on the mic or in the mosh pit.

AnA Saldana – A Los Angeles native. She is a singer/songwriter, producer, and activist for immigrant rights and Mother Earth. Ana believes music is our soul’s revolution and hopes to keep her culture and roots alive through song. She has affectionately coined Neo Soul Ranchera.

Earth Arrow – A Los Angeles Afro-cuban hip hop-based band focusing on reviving ancient african and indigenous rhythms and dance .Earth Arrow is a reflection of the fire that burns in the hearts of all who live in colonized lands across the world. A pioneer of indigenous blues sounds, they set out to defy expectations and explore new realms of emotional intensity while incorporating modern hip hop and jazz sabor.

We would like to thank Avenue 50 Studio for providing a platform for artists of color.