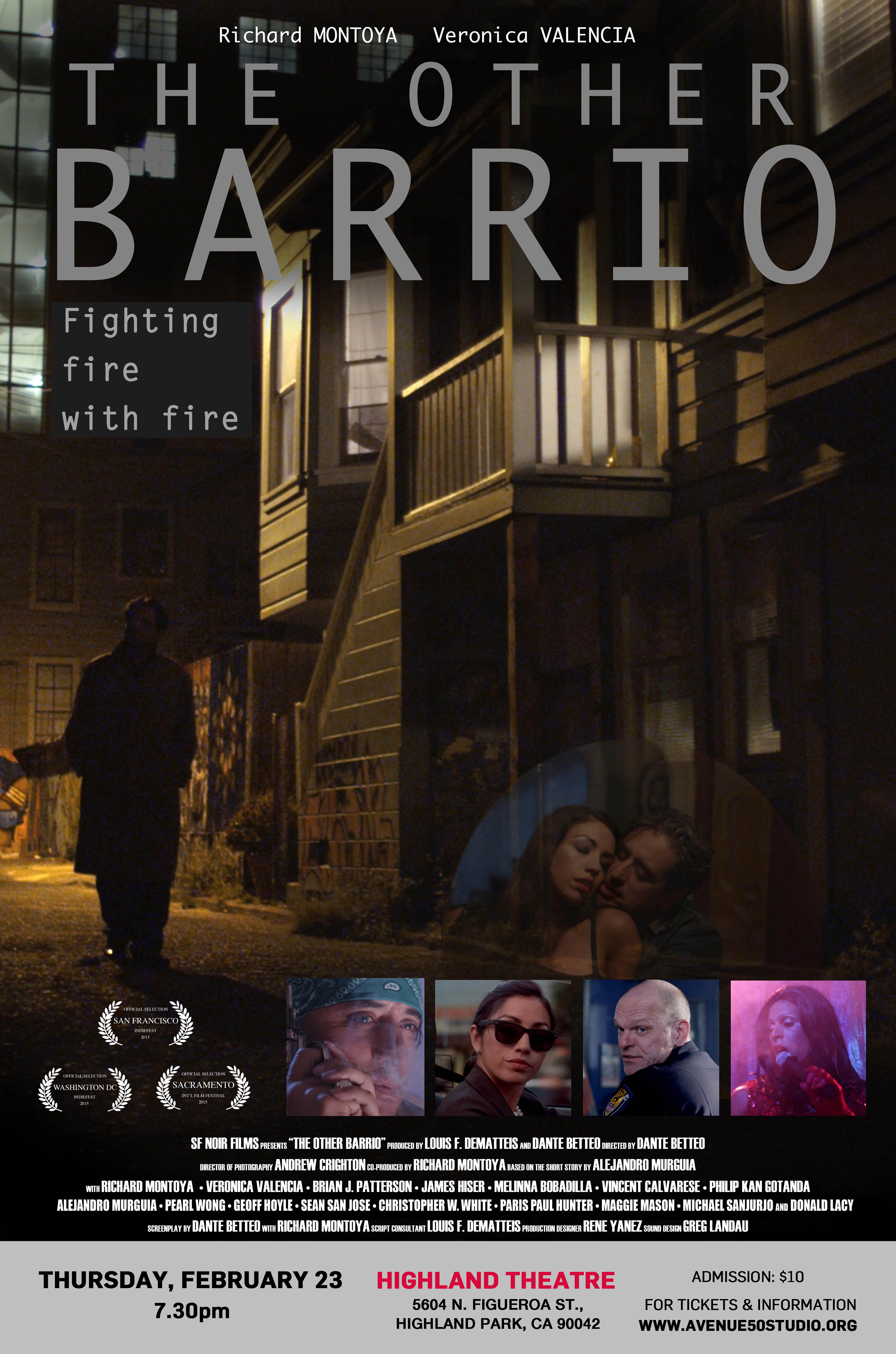 venue 50 Studio
in partnership with SF Noir Films, is proud to present

ABOUT THE FILM
This feature film directorial debut from Producer/Director Dante Betteo is based on a noir short story by San Francisco Poet Laureate Alejandro Murguia.

Shot on location in San Francisco and based on true events, THE OTHER BARRIO tells the story of housing inspector Roberto Morales as he investigates the suspicious circumstances of a fatal fire in a residential hotel in San Francisco’s rapidly gentrifying Mission District and finds himself face-to-face with murder in the streets, corruption at City Hall and the mysterious Sofia Nido, a beautiful but dangerous flame from his past.

Raised in the Latino Mission District, Morales used to play with neighborhood friends where expensive condos are now going up, and he resents the fact that development is eating away at the old flavor and character of The City and that evictions are driving out longtime residents of the barrio who are replaced by tech industry workers inundating the neighborhood. He suspects arson is behind the fatal blaze that killed seven people but is under pressure from his boss to report fire hazards as the cause.

As he investigates, he is drawn into a web of bribery, murder and corruption pointing to powerful real estate interests and City Hall. Along the way, he encounters the beautiful and mysterious Sofia Nido. Sofia is the lawyer for her aunt, a powerful figure with ties to downtown interests. Morales suspects Sofia and her aunt may be involved with the fire. To complicate matters, his attraction for Sofia grows at the same time that a key witness turns up dead. Can he trust Sofia? Who is really behind this fire and others? Will the forces behind the fires silence him before he can discover the truth?

When the investigation gets too hot to handle and he doesn’t know who he can trust, Morales goes underground, living incognito in residential hotels and even a homeless encampment where he is surprised by the city smarts and knowledge of his companions.
Eventually building an alliance with young tech savvy housing activists and aided by a San Francisco street poet, he finally discovers the proof he needs to bring the perpetrators of the crime to justice. But will he live long enough to get the truth out?

With San Francisco’s dramatic cityscape as a backdrop and a nod to noir films shot there in the past, THE OTHER BARRIO reveals the diversity of the City, the isolation of its characters and the obsessions of modern urban life, taking viewers deep into neighborhoods and communities seldom seen on film.