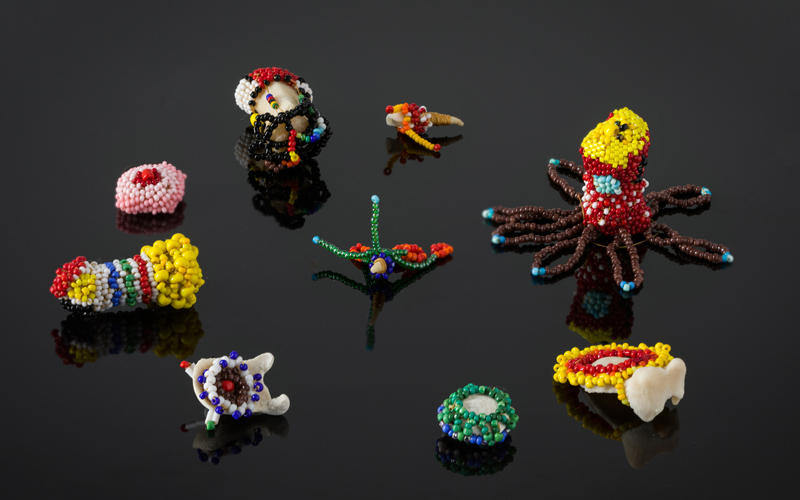 2 oxtail bones; 1.125”x 1.5”x0.5” yellow & orange beads in a circle (looks like a toilet seat cover & it can be flipped up & down) & a smaller version of the toilet seat but with white beads on top & each of the white beads has either a yellow, red, green or black bead atthe end which represents the 4 directions, on it’s underside there is a large red bead in the middle of a circle of brown beads, an outer circle of white beads & blue beads along the edge; 2018.

2 small round bones; 0.75”x 0.75”x0.25” & has a large yellow bead in the center surrounded by light blue beads then a double ring of black beads, a single row of white beads & then mostly green with some blue beads wrapping around to the other side. The other one is all pink – 1”x0.75”x 0.25” – large red bead surrounded by smaller red beads & then everything else is all various shades of pink until it gets to the other side where the center is 3 larger dark green beads & 4 smaller lighter green beads with a ring of black beads & then all pink beads; 2018.

3 small but longish bones (like a fat thumb); 1) black petal like shapes, string & bone are visible beneath the beads, capped off with yellow beads on oneside & red beads on the other & white on the ends. 2) mostly read with loops of brown beads with 3 blue beads on the end. 3) one knobby side is all yellow beads, then a ring of white, then red, then white, then blue, then white & at the other knobby end is a grouping of red yellow, black & blue beads; 2018.